Gothic II
Since Gothic 2 was not released at the time I wrote this, con 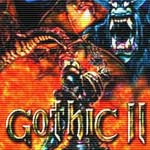 sider it a pre-rating. Because I know the game engine is basically the same but with more detailed textures and higher res. I know Gothic 2 will rock! The first one is the single best rpg I have ever played. No other real time game has ever come so close to making a world feel so real. I know Gothic 2 will give me more of what I want. Which is simply more of the same! Despite much complaining about the interface for Gothic 1 which was in fact just fine, Gothic 2 will have 2 styles of control. I will be the first kid on my block to own this one!