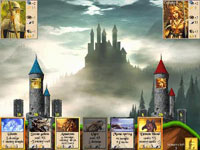 game review: Realms of Magic is a fantasy based card game, like Magic: The Gathering, in which the goal is to destroy your opponent's castle before he destroys you. It has hundreds of fantasy units, heroes, items and spells to assist you in overcoming your enemies in strategic and tactical warfare.
Realms of Magic can be played against either an AI or human opponent(s). Each player takes turns and at the start of each turn, their kingdom produces a quantity of each resource equal to the strengths of various resource generators. You then draw cards that represent creatures, spells or artifacts which are used to produce varying effect.