game review: Pacific Fighters is a flight combat title that takes place in the pacific theatre during World War II. Re-create some of the most decisive air battles of WW II and experience famous locations like Midway, Guadalcanal and Iwo Jima, where the courage of a single pilot could turn the tide of war. The game is backed by the Oleg Maddox team, the makers of the popular IL2 series. For the first time in the IL-2 series, players can engage aircraft carriers in combat and utilize them to take off and land. Players take control of more than 40 different aircraft on both sides of the battle lines. The 16 maps in the game include Guadalcanal, Pearl Harbor and Singapore. Online multiplayer allow for dog fighting and cooperative missions.

WHEN THERE ARE NO OBLIVION GATES LEFT TO CLOSE AND YOU CAN’T BE BOTHERED WITH
those pesky “other people” in MMOs, where’s a roleplayer to turn next for his free-form fi x? The
hardcore RPG cognoscenti have their palantíri fi xed on German-born Gothic 3, heir apparent to
Oblivion and cult-favorite series among the illuminated. But how does this third iteration stack up to The
Elder Scrolls? Producer Michael Paeck helps us count the ways. 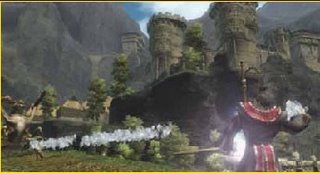 Bugged that Lord Porridge the Bedeviler, boss monster from your favorite MMO, seems to have infinite heads to turn in? In single-player RPGs, actions can have real, world-changing consequences. 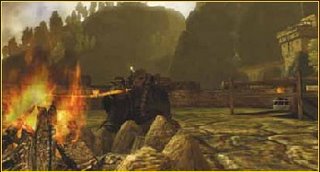 Previous Gothic games were huge hits in their native Germany but tanked in the U.S. Paeck attributes that to poor localization and general market differences.

A DRAGONFLY FLAPS ITS WINGS IN THE DESERT, AND AN UPRISING FAILS IN NORDMAR

THE WAY OF THE WILL
While Oblivion’s “Radiant” A.I. boasted NPCs with needs and goals, most players never saw much more than folks strolling around town with fi erce determination. “Although the NPCs in Oblivion follow a daily routine,” says Paeck, “most of them just stand around or walk from Point A to B.” Gothic 3’s A.I. purports to go beyond mere Radiance: “We believe that the variety
of the daily tasks that NPCs perform in Gothic 3 is much higher—from smiths creating weapons, selling items, and sharpening their swords to tavern owners sweeping the fl oor and serving guests, among other things.”

But the A.I. deals in more than just individual motivation—it also covers pack communication. If you act like a loot-stealing, peasant-slaughtering fool in one town, expect word of your actions
to spread to the next. Paeck describes the RPG equivalent of chaos theory: “You get into a fi ght with a drunken barbarian and knock him down. As a consequence, his friends seek you out later to discuss the matter, and you teach them a lesson. Much later, you travel north and come to a
village, which turns out to be the drunken barbarian’s hometown. People there realize that you’re the guy who knocked down their cousin, because news of the incident traveled. They probably won’t like you, and they may be afraid of you. On the other hand, you gained the respect of this village’s local chieftain, who exiled this particular troublemaker long ago. Had you
taken different actions with this barbarian, the interaction with the villagers would likely be different.” A dragonfl y fl aps its wings in the desert, in other words, and an uprising fails in the mountains of Nordmar.. 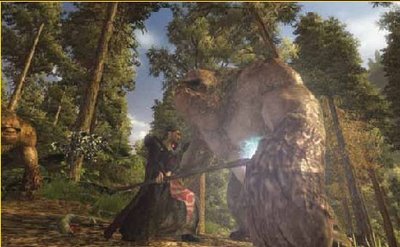 THE WAY OF THE WARRIOR
As in Oblivion, combat is action-oriented; unlike those in Oblivion, Gothic’s battles are designed to be fought from third-person with soft-lock targeting. The left and right mouse buttons control a variety of attack types (quick, normal, heavy, jump, stab), while hotkeys switch among spells, ranged weapons, and melee confi gurations. Freedom is the watchword for character development; players don’t choose a class, but rather develop based on play style. “Our system supports players who want to focus only on being a pure, weaponless mage, pure fi ghter, pure thief, or those who want to be well-rounded,” says Paeck. “The hero can also learn how to sneak into houses and pick locks or how to sneak near animals to become the perfect hunter. The catch is that the player must fi nd the right trainers and convince them that he’s worthy.”

THE WAY OF THE WORLD
As anyone who’s hoofed it across Cyrodiil will tell you, the landscape of Oblivion isn’t mottled with intense variety— gray medieval towns, blue elven ruins, green forests, repeat. Gothic 3’s world is smaller and cozier, but it’s divided into three distinct regions, each with its own visual and gameplay nuances. 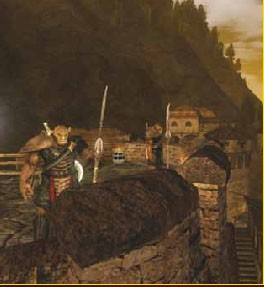 The Middle Realm Lush forests, narrow passages, torrential downpours, and a little bit of magic defi ne the Middle Realm. “Each of the three regions contains new tribes and factions with their own philosophies and goals,” says Paeck. There are no clearly “good” or “evil” factions in Gothic 3’s world—just parties with different views. Varant “The wide-open spaces of the desert emphasize a sense of isolation as you’re searching for the next town or oasis,” says Paeck of Gothic 3’s Arabian-influenced southern realm, ruled by the Hashishin tribe. Players can pick up
certain skills only in specifi c areas of the world. Only the Hashishin, for example, can teach how to fi ght with two swords. Nordmar Harsh mountain terrain, cliffs, and heavy snowfall mark the Nordic-inspired country to the north. “There are only a few small paths leading through the mountains of Nordmar,” says Paeck.

“Thus there are no ways to avoid your opponents—you have to face them. But of course, it’s easier to push enemies over the edge of a cliff.”

(best known for the award-winning Syberia and Amerzone). Set in the heart of Africa, the story follows a young woman named Ann Smith as she crosses the continent to take a leopard back to Kilimanjaro, the place of his birth, encountering fabulous, unknown animals in the wilderness on the way. Fraught with political turmoil, the lush landscapes are beautiful and dangerous. Puzzle solutions are seamlessly embedded in the story as players interact with their environment and other characters to gain insight into clues that will help reveal Ann’s true identity and answer why she’s in this strange African land.

A MERE 30 SECONDS SEPARATE THE
explosive ending of F.E.A.R. and the back-from-black beginning of its first expansion, Extraction Point, but in that short time, big events have transpired outside the bounds of the game box. In 2004, original F.E.A.R. developer Monolith (after being purchased by Warner Bros.) divorced publisher Vivendi Universal Games and split the FPS estate as follows: Vivendi keeps the
vestige of the prenuptial agreement—a VUGpublished expansion pack agreed upon before
the breakup that uses every asset except Monolith. The new developer? A house called
TimeGate (known primarily for strategy games such as Axis & Allies and Kohan), constructing
this encore with Monolith’s guidance and story approval. Bizarre, no? acronym name; Monolith keeps the IP (intellectual property), including the characters, story, and right to make games in the universe it created. Extraction Point is the last anomalous

But it might explain why Extraction Point follows the letter of expansion-pack law to a T. New weapons. New areas. New monsters. Check, check, check. For those who couldn’t get enough of F.E.A.R.’s dodgy, camouflaged assassins, Extraction Point brings you shadow creatures. “They’re like poltergeists,” says producer Tim Hall. “They’re created by [series paranormal girl-villain] Alma’s increasingly unstable mind. They have a penchant for pulling people apart limb by limb. The only warning the player will get is to catch a glimpse of a shadow out of the corner of his eye…and the only way to combat the shadow creatures is to use slow-mo.” For
those who quickly tired of F.E.A.R.’s endless cubicles and office spaces, TimeGate offers up a few new canvases to paint with bullet holes: a subway, some sewerlike catacombs, a stately church (and its cheaply decorated rectory), and an outdoor construction site if you’re C.L.A.U.S.T.R.O.P.H.O.B.I.C. In all of these locations, the key word is “destructible”—doubly so with EP’s new minigun, gun, carried by Extraction Point’s new heavy soldiers. Not exactly the most novel weapon, but in practice, it’s ideal for F.E.A.R.’s trademark scenery-chewing firefights—TimeGate packs its levels with plenty of suspiciously placed plate glass windows, loose books, and canisters to shred to pieces.

The A.I. is up to its old honor-roll standards, too—and then some, according to Hall. “The units are more aware of their environments than ever before, and they do everything in their power to make sure they utilize those environments.” We spotted more than a few soldiers knocking down crates for cover. And if you don’t blow up that steel support beam yourself, there’s a good chance the giant missile-firing mechanoid will do it for you. Given the behind-the-scenes circumstances, it seems natural that Extraction Point would play it safe—don’t mess with the darling original, give players a little bit more, and save the big, huge leaps for the honest-to-goodness sequel, whatever its name may be. A textbook setup for wherever Monolith, Alma, the acronym, and the IP go next.

game review: Based on the blockbuster online multiplayer war Battlefield

franchise, EA and developer Digital Illusions are taking the battle to another realm with a modern-war era edition
somewhat similar to Battlefield 2 for PCs but developed exclusively for console gamers.
Players from the United States, China and the Middle East Coalition will all be represented in
harrowing battles of up to 24 players. Command tanks, choppers and any other of more than 30 military vehicles, and make use of more than 70 kinds of weapons (including heat-seaking missles, laser designated bombs and other modern military hardware.)
0 comments

game review: From the creators of the award-winning Medal of Honor: Allied Assault comes Men of Valor: