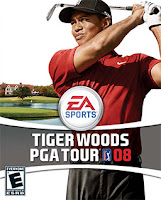 review: If you put a gun to my head and demanded I choose between the Windows and Xbox 360 versions of Tiger 08, well…things might get a little messy. On the one hand, this version is somewhat more realistic in its approach to the game. And it’s considerably more forgiving in the putting department, which is a welcome change. But, oh, those character models. Watching these dated-looking, mannequin-esque golfers stomp woodenly through the lush, detailed links is like a crash course in the theory of the Uncanny Valley. In fact, much of the game feels like an afterthought to its more modernseeming console brethren. The stat system, for example, is drastically simplified, and absent are the skill challenges that allow you to build up a created character’s abilities. This version is geared more toward the reallife golfer, though, with more courses, a more complex shot system, and a vastly more realistic PGA Tour mode (in which you start out as a nobody, rather than jumping right in against the pros). Better yet, the elegant “TrueSwing” system returns; the action of pulling smoothly back on the mouse and pushing forward—with the proper tempo, direction, and speed—is the closest thing to actually playing the game we’re likely to see for a while. Of course, aside from the marginally effective confidence system—which boosts or hurts your accuracy depending on how familiar you are with a hole—you’ll find hardly anything significant enough to justify a purchase if you already own Tiger 07…or even 06.•