PC game /Meet the Suruga sisters, Ryoko, Maki and Miho. Ever since their parents died they've been living together, getting by as best they can and never feeling lonely because they've got each other. The Suruga sisters have a very special secret: due to an unexplained physical phenomenon, a sensation shared by one Suruga sister will be felt by the other two, no matter where they are. If one

A fresh and unique bishoujo gaming experience, Doushin ~ Same Heart is a "zapping adventure" in which you play the game through the eyes of the three main characters, "zapping" from one girl to the next as you explore the complex game story. This new game concept ads a unique dimension to Japan's popular dating-sim game format, allowing you to explore the game through the eyes of different characters on different days. Because of their mysterious power, each girl's story is totally intertwined, with events affecting all three characters in different ways. Since all emotions are experienced through the eyes (and bodies) of the three Suruga sisters, the game is fresh and exciting every time you play.
0 comments
Email ThisBlogThis!Share to TwitterShare to Facebook

is fast-paced soccer sim, based on the European series running from July 2006 through the championship game in May 2007. In addition to realistic competition between real-life clubs and players, EA Sports' PC version of UEFA Champions League 2006-2007 challenges gamers with over 400 goals to accomplish, including winning the epic "Treble" combination of Championship League Trophy, the Cup, and the Domestic League championship. Success on the pitch unlocks new options and features, such as new stadiums, playing surfaces, and gear.
0 comments
Email ThisBlogThis!Share to TwitterShare to Facebook 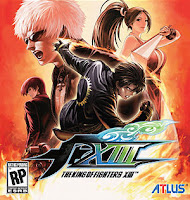 The game removes some of the gameplay systems used in the previous game: the Guard Attack system, the Critical Counter system, the Clash System as well as the dynamic, zooming camera. In their place, however, there are new systems that have been confirmed to be added; the first of the three is the new EX Mode, which convert each character's super moves into more powerful versions that allows one bar from the player's power gauge for EX Special Moves and two bars from the player's power gauge for EX Desperation Moves. Another new addition is the Hyper Drive mode, which gives the player unlimited use of Drive Cancels for a while once the Hyper Drive Gauge has been maxed, and the last new feature confirmed for the game is the Drive Cancel system, which opens up new combo possibilities. The game also marks the return of the multi-bar power gauge that was introduced in The King of Fighters '97. In addition to standard and EX Desperation Moves, a new class of Desperation Move entitled "NEO MAX" are included in the game and require that three stocks of gauge be exchanged in order to perform one, making it similar to Hidden Desperation Moves (The King of Fighters 2002) and Leader Desperation Moves (The King of Fighters 2003). These can also be cancelled from standard Desperation Moves, making them similar to the "Dream Cancels" from The King of Fighters XI.

PC game / Sega's signature tennis series appears for the first time on PlayStation 3 and PC with Virtua Tennis 3. As in previous versions, p

layers are free to create a male or female athlete and build his or her attributes through an event-filled career. The goal is to gradually improve your character's ranking by competing in sanctioned tournaments held across the globe. In between tournaments, players can participate in skill-oriented mini-games or train at a tennis academy. The mini-games in particular are just as wacky as in earlier titles, with players attempting to outwit aliens, alligators, and more by hitting targets as quickly and as accurately as possible.

Featured play modes include World Tour, Tournament, Exhibition, and Court Games, where up to four players can compete in their choice of doubles, mixed doubles, or singles play. Twenty professional tennis stars are available to play as or against, including such notables as Andy Roddick, Maria Sharapova, Amélie Mauresmo, and Roger Federer. Characters will compete in a variety of international venues, with clay, grass, hard court, and carpet surfaces all influencing shots in realistic ways. Online support is included for the PC version.
0 comments
Email ThisBlogThis!Share to TwitterShare to Facebook

Pc Game/Review: In other first-person shooters, forward is the one and only way lo go. Glowing switches and spawning goons and out-of-the-ordinary lighting and other less obvious goads reas

sure you that you're on the right path. You can see a htm and not understand a scene, read a novel and not comprehend a chapter, and the show or the story stili goes on. Not so with games. And, as more and more players play more and more games, a *no gamer left behind" mentality emerges. Whether developers decide to lean on hgurative signposts Of to give up and graffiti their games with literal and gratuitous arrows (as Perfecl Dark Zero did on Xbox 360 and Half-Life 2: Survivor does İn Japanese arcades), hours and hours ot guinea pig input had some say in it You can imagine movies and TV shovvs focus-gtouped this way, but what about videogames that aren't?
OK, Ukraine-made S.T.ALK.E.R. isn't the first FPS to assume Its audience Is intelligent—far from it. Perhaps it's the way İt is because the studio bypassed the publk part ol the test-iterate-test phase to cut costs. Or maybe it was the cultural distance between Kiev and LA. that made the difference? Or the lag in time betvveen 2001 when GSC Game World announced the title and today In 2007 when market analysts advocate FPS as a "grovvth genre'? Is it in other words, just that S.TA.LK.E.R. is similar tosome American shooters made before "everyone" became a target audience?
SLAG PILE OF FORKING PATHS
S.T.ALK.E.R. isn't quite The Elder Scrolls IV: Oblivion. You can't pick a compass point and press on until you hit something interesting; invisible radiation prevents you Irom scouting a level's perimeter and looking out over the edges, and stili S.T.ALK.E.R.'s tandscape is less movie set "Main Street" than Call of Duty' or Half-Life's or Ghost Recon'%. However constant the tracks, the vvidth of the course changes: Early on. an elevated railvvay impedes progress. Government men guard one road beneath a bridge and will let you through for a fee or a gunfight A tunnel vvorks. too...only it's slop-pered with electromagnetic anomahes (the PDA file on a nearby dead man explains the environmental puzzle). And finally, a hole in the fence lets you through, if you look to find it. Even when the way isn't triplicate, It feels more natural than another FPS's unspooling script You'll circle a building burglarlike, (or example, before finding a point of entry (and perhaps meet a prisoner vvho—calling from his celi vvin-dow—makes a mission offer as you pass). 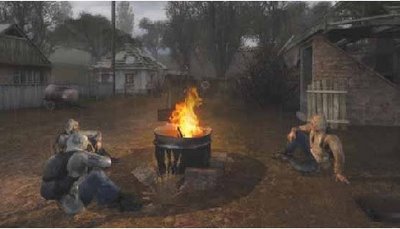 Everyihing Bad Is Good For You author Steve Johnson argues that "far more than books or movies or music. games force you to make deasions [...] ali the intellectual benefils of gaming derive from this fundamental virtue, because learning hovv to think is ultimately about learning to make the right decîsions: weighing evidence, analyzing situations. Consulting your long-term goals. and then decid-İng." l'll add that choice-rich games are often not only more intellectually engaging. but also more entertaining. Too few singfe-ptayer shooters force us to make decisions other than when to shoot and vvhat to shoot it with. SJA.LK.E.R. complicates things by adding both 'how to get there" and "vvhom to oppose/vvhom to help." One time—and, like Oblivion, this Is the variety of videogame that lends itself to stories that start vvith "one time"—I encountered a gang of itinerant stalkers off the highvvay. and I vvon-dered vvhat was going on. "Buy a Gauss mag-netic accelerator gun?" one asked. He wanted next to nothing for it. But önce my money vvas in his hands. he told me to beat it. t happened to have a loaded underbarrel grenade launcher, but the decision to barter and then to fight back cost me more in scarce munitions than in coin.
RADIATION SCARE
In its deep underground facilities (GSC's ansvver to dungeons), S.T.ALK.E.R. is scarier than F.E.A.R. itself. Poltergeists fly pasL Invisible hands huri barrels as your flashlight bobs for the next noise. At times—Geiger counter crackling—I wanted to turn the game off, or at least get topside and into the light. Down here, SJA.LK.E.R. fares better if evaluated as an FPS vvith RPG trappings than as a fully fledged hybrid. You lock and load for these things. stock up on armor-piercing bullets and first-aid tins and radiation antidotes, and retool the assort-ment of artifacts In your belt (think: enchanted ıtems that slovv blood loss or limit electrocution injury at the expense of some other vulner-ability). The trouble is retuming to the shop if it turns out that your rucksack's stuffed wrong. Although RPG-like. the game vvon't let you click-port between key map points to cut out the hiking. Similarly, a more RPG-derived economy might've solved another snafu (that also leads to the least satisfying of S.T.AL.K.E.R.'s moralizing endings): lotsa money to spend and litle to spend it on. more...>
1 comments
Email ThisBlogThis!Share to TwitterShare to Facebook
PREVIOUS NEXT