Brothers in Arms: Road to Hill 30

PC game / Although it offers its share of authentically equipped, WWII shooter action, Brothers in Arms is a squad-based game that requires players to manage and deploy their three-soldier teams intelligently in order to meet mission challenges. Instead of a straightforward run-and-gun progression, the game's situations are designed such that players may need to move the 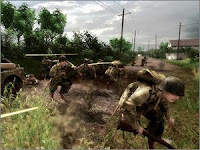 ir men around the battlefield to recon the surroundings, provide cover fire, and pin down the enemy, before they move in for the final kill.

The adventure begins with the D-day airdrop over Normandy, and missions follow situations faced by various members of the real-life 502nd Parachute Infantry Regiment. The player's character, Matt Baker, is also based on the stories of an actual World War II paratrooper.

In addition to its action and tactical challenges, Brothers in Arms also incorporates some role-playing styled decision-making. While the game's AI is intended to provide for competent, self-preserving squad-members, is also endows them with human wants and fears. Baker must consider his teammates interests as if they were real people -- his "Brothers in Arms" -- in order to keep their trust and have them follow his orders effectively.

Dizzy Prince of the YolkFolk

PP Hammer and his Pneumatic Weapon 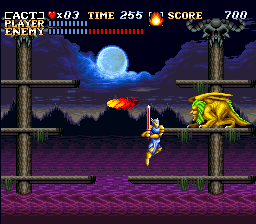 P. P. Hammer and his Pneumatic Weapon is a computer game for the Amiga and for the C64. The game is a platform game with puzzle elements.

PC game / The world Elder Scrolls expands once again with the release of Elder Scrolls IV: Oblivion -- The Shivering Isles. Focusing on the realm of Sheogorath, players may use an existing character or create a new identity and then explore the environments of the Shivering Isles. There are two sides to the adventure, and gamers may work their way through the dungeons found in the land of Mania and Dementia as they take on such creatures as Flesh Atronachs, Shambles, and Grummites. There are several additional items, ingredients, and spells to collect that are new to the Elder Scrolls universe, and now gamers may hire Crucible and Bliss craftsmen to create customized weapons and armor.
0 comments

PC game / Link letters to form words and rebuild the Great Wall of China in this epic word game. For more than 1,000 years the Great Wall has protected China from its enemies. But now a new threat has emerged. Embark on an epic journey of word building to repair the wall section by section and save China. Featuring three game modes, an epic storyline, and addictive fun, Great Wall of Words is a true word wonder.
0 comments

Playable alone and in cooperative mode (local & online), Obscure lets you play as one of four unlikely heroes; students, each with unique skills and abilities that develop throughout the adventure. Geared toward action and all-out brawling, Obscure's combat emphasizes combos, follow-up attacks, and score-multipliers! Survive against packs of monsters trying to skin you alive, discover new weapons, and complete objectives throughout a variety of huge, non-linear levels. Overshooting the scores will earn you experience points to level your character up, unlocking new weapons, skills, and other devastating abilities! At any time, you can even get back to some of earlier levels to try your new toys and beat your scores!