PC & Mac game / The much anticipated sequel to the #1 casual game of 2005, Luxor 2 sets the new standard for action-puzzle casual games.
Luxor 2 still offers the addictive and easy-to-learn, yet difficult to master game play which made the award-winning Luxor franchise such a smash hit, while taking the game to a completely new level. Luxor 2 takes you on a beautiful voyage through the land of ancient Egypt. Play 88 all-new, gorgeously rendered levels of brilliantly displayed crisp and stunning graphics set amongst the pyramids and temples of ancient Egypt. Use your mystical winged scarab to shoot and destroy the approaching magical spheres before they reach the pyramids at the end of their path. And to help you shoot down those enemy spheres, Luxor 2 features more explosive power-ups than ever before.
0 comments

PC game / the protagonist of the game is Lester Knight Chaykin; a young, athletic, red haired physicist. Lester arrives at his high-tech underground laboratory during a thunderstorm, and continues to work on his experiment using a particle accelerator. Right before the particles reach their intended destination, lightning strikes the lab and interferes with the accelerator causing the unforeseen teleportation of Lester to a barren alien planet.
0 comments

GOW2 deserves a 10: -Graphics: it's better looking than any game on the PS2, and even looks better than a few games on the PS3. In terms of lighting, framerate, character models and movements, it's, for lack of a better word: brilliant. Just look at the scene where he's riding the Pegasus to the Island of the Fates and when he kills those gryphons. -Music: is thrilling, a sweeping epic score that puts most movies to shame. -Voice Acting: is great and doesn't sound forced (as in, the script writers aren't trying to be overly clever or archaic, which would make the voice acting sound silly). -Story: starts off with a bang and ends with a louder bang.

Playable on Pc
This isn't like the first GOW where we have a long, drawn out story of Kratos' past. Rather, it's all about his present anger and thirst for vengence. Also, the use of Greek myth (for those who like this stuff like me) is a bonus, because you'll meet a lot of familiar characters, monsters and get to see a lot of familiar places. -Pacing/Puzzles: never gets bogged down and there's a fair bit of puzzle play thrown in to balance things out. 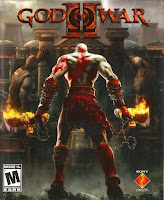 Playable on PC by Pcsx2 Emulator
-Gameplay Mechanics: GOW2 has the single best battle system of any game ever created. It's lightning fast and there's so many different moves and weapons which allow for great variety. If you think it's an easy game, that's because you haven't tried it on the more difficult modes. -The Golden Fleece power-up enhances the experience by giving you awesome counter-attacks, which also boosts the frenzied pace of the gameplay because you need to keep countering on the higher difficulty levels (I started the game on hard difficulty, and when fighting bosses I had to keep counter-attacking to survive). -Bosses: the scope of the boss battles is HUGE! I couldn't wait to encounter each new boss because they made it just that fun, from Theseus to the Barbarian King to the end bosses. And the way Kratos kills them all brings a tear of insanity to my eyes. -Trust me fellow gamers who haven't yet made this purchase: forget what everyone's saying (including me) and just go out and buy this game. You can rent it first, but that'll be a waste of money since you'll soon buy it anyway. -One of the top console games of all time.
0 comments

The program can't start because steam_api.dll is missing from your computer solution

Since you have not played the game in over a month, your AV has had updates and now your "steam" file has been flagged as a threat. It is a known common problem for many AV that this steam file is flagged and is really a false/positive.

You game will not run because the AV updates are zapping it. Somewhere in your AV settings you need to not include this file or game folder in your AV to check. It continues to get zapped.

This should fix your error on the steam file. hopefully it will solve your save files.

If you have trouble saving, on your desktop shortcut "run as admin". Again, another common problem with this game that can be fixed by "run as admin"
2 comments

PC game / Mafia takes place in the fictional 1930s city of Lost Heaven. The player takes the role of a relatively innocent cabdriver who becomes involved in the underworld of organized crime through a random accident. While between fares one night, the hero is suddenly approached by two shady characters in urgent need of a ride. Fearing a quick shot to the head if he refuses, he accepts the passengers and, thanks to his excellent driving abilities, is able to help them escape the rival gang members that had been chasing them. Quick thinking and good driving skills save the day for the thankful mobsters, who make it a point to remember the main character. When he finds himself out of work a short while later, the hero is graciously welcomed to "the Family."

The third-person adventure in Mafia has the player moving about a 12-square-mile city, designed from authentic photographs and architectural plans from the 1930s. The player will have almost complete freedom to move about the city, exploring and interacting as he sees fit. Each building is unique, providing a sense of location and allowing the players to learn landmarks as they travel through Lost Heaven. A wide variety of missions will have the protagonist racing cars, investigating seedy hangouts, and even executing hits (if his conscience will allow it). Mafia is designed to envelop players in the look and feel of the classic gangster movies that were its inspiration. download megashares megaupload rapidshare sendspace torrent
1 comments

PC game / Built as a launch title for Windows Vista, Jewel Quest 2 features a stay-at-home jungle adventure that includes 144 different layouts and 180 puzzles. Gamers who follow the path of Professor Rupert Pack, must complete each level by matching gems up in threes before the timer runs out. More difficult than the first release of the game Jewel Quest 2 challenges players with immobile gems, cracks in the layout where jewels can get stuck, and cursed rocks that undo the last action taken. However, with enough combos, players can activate the gold button and complete the level.
0 comments Benefactor
Benefactor is a mix between a puzzle game and a platform game. It has a similar concept to Psygnosis's earlier, very successful Lemmings series of games, but also adds its own ideas.

The Matrix: Path of Neo

Prince of Persia: The Two Thrones

the Moment of Silence

Crown Of Glory Europe In The Age Of Napoleon

Need for Speed Most Wanted

The Suffering: Ties That Bind

The Settlers: Heritage of Kings

Harry Potter And The Goblet Of Fire

Heroes of the Pacific

Brothers in Arms: Earned in Blood

PC game / It's not easy for a truck-drivin' man in a world gone wrong. Set in the desolation of a devastated planet, Hard Truck: Apocalypse challenges players to make their own way through the wastelands, earning profits from dangerous deliveries and investing in truck weapons and armor to support even more daring runs. Brigands and pirates haunt the open spaces of the post-cataclysmic Earth, and they won't hesitate to attack anyone who crosses through their territory -- especially anyone who might be hauling a load of valuable goods. The game's driving action is designed for fast-paced vehicular combat, while exploration and upgrades provide elements of adventure and role-playing. Five basic models of truck are available, and all can be customized.
0 comments
PREVIOUS NEXT Home