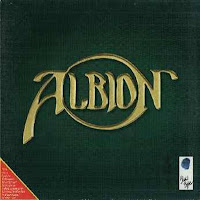 Albion is a single player computer role-playing game developed and published by Blue Byte Software for MS-DOS in 1995.

year: 07 - review: Poor Lara Croft She's spent an awfut lot of time getting kicked around by her creators. But last year's Legend went a long way toward redeeming Lara and compensating for the many wrongs done to her and the franchise. Now, Tomb Raider: Anniversary proves that was no fluke. 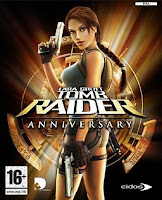 As a retelling of the original story, Anniversary is all about archeology and exploration—in short raiding tombs. In fact. Anniversary feels tike what Tomb Raider was always intended to be. The story is the same, the levels are named the same. and they're set in the same areas...but virtually everything else is different Gone are the vast black, cubist spaces of the first game, replaced by enormous, gorgeous, detailed levels with plenty of opportunities for vertical movement and vertigo-inducing acrobatics.
I do miss those open spaces, though; being in the middle of a small pool of light in a seemingly limit' less cavern gave a sense of scale and exploration that Anniversary doesn't quite match. But that's a small complaint that's more than made up for by the excellent pacing and level design, which provide some nice scares and genuinely tense moments.

LEGENDARY
Playing to the strengths of Legend's engine. Anniversary features an exceptionally acrobatic Lara. She scales ledges, leaps onto columns, and grapples along walls at a furious pace clearly inspired by the recent Prince of Persia games. Trouble is. Anniversary's got no Rewind button. At first that's not much of a problem, as the focus is more on exploration and puzzles. But as you move into the third act. things start to get considerably more challenging, building up to an absolutely vicious endgame, which features a positively sadistic series of traps and fingernail grabs (yes, you are correct trying to play this without a gamepad is an excruciating experience).
It's not as infuriating as it could be; a generous checkpoint system mitigates the frustration as much as possible. But one downside to moving from the original games' square-by-square movement to a more fluid system is that it can make for some annoying quirks when executing difficult jumps. You'll hit areas where you have to get the angle just right..and find yourself missing the jump over and over as you try to figure out the precise positioning. This sort of issue is compounded by the squirrelly, hyperactive camera. You'ie not constantly fighting it but it intrudes just enough that you'll notice it more than you should.

AS A RETELLING OF THE ORIGINAL STORY ANNIVERSARY IS ALL ABOUT ARCHEOLOGY AND EXPLORATION-IN SHORT. RAIDING TOMBS.

Looking at Anniversary as a whole, though, these issues are fairly negligible. Overall, it's a solid, entertaining game with a hell of a lot of fun stuff packed in (including a fairly extensive bonus quest set in Croft Manor). It may not offer the same degree of wonder you may remember if you were around for the very first game, but it's a damn fine homage— and a damn fine game in its own right .
1 comments
Email ThisBlogThis!Share to TwitterShare to Facebook

year: 07 - review:Time's slapped a big gold "console classic" sticker on Halo 2. I can see why. Halo 2 was a benchmark for FPSing with analog sticks; its dual-wielding expertly worked the button layout of an Xbox control pad. Co-op was a blast Vast multitudes still play on Xbox Live, and for good reason—its simple matchmaking tools and party system (which let you tag along with friends from match to match with minimal effort) were a revelation and a revolution. For consoles. In 2004. 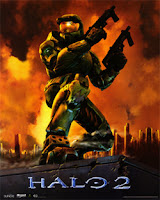 A CARNIVAL OF SORTS
Transported to PC in 2007, however, Bungie's console classic looks downright primitive— especially when landmark games like Half-Life 2 and Battlefield 2 have reset the bar for what a PC FPS can and should do.
If you're considering picking it up for the single-player campaign, reconsider: Switching viewpoints between Master Chief and one of the game's nonsensically religious outer-space shark-monkeys was, and is, a narrative disaster—and the game's ending, an abortion on the Xbox. is still an abortion here. The original Halo's story was better. The shooting -gal lery-styte gameplay was simple then and is even more so now, as the chunky. Muppety Covenant seemed unprepared for the precision and speed of the mouse. Enemies and effects look slightly sharper and shinier, but textures and level structures that worked just fine on the Xbox look gross on modern PCs. Characters not clad in shiny helmets or made of pure energy have a bad case of cookie-dough face, and corridors and stairwells consist of repeating patterns of trapezoids and triangles. It's all fun and colorful, but so is a carnival—and equally run-down.

UNIVERSAL QUESTIONS
As proof of concept for Games for Windows Live, Halo 2 is partly convincing. You won't have trouble finding a game online, and enough folks play to keep a half-dozen or so public servers full at any time—though unless you happen to have a dozen friends with Halo 2 and Windows Vista, you'll have to settle for whatever mode the masses are playing, which is usually Slayer (death-match)...or if you're lucky. Team Slayer (even the more "complicated" modes are simplistic suck it up or sit it out).
The control scheme makes few concessions for PC gamers. Instead of using a run key, you move at the console version's "max speed," which barely qualifies as a light jog. Plug in an Xbox 360 control pad and you're treated to instant transformation of HUD elements and generous aim assist. Nearly two dozen maps populate the game— though the online community's already settled on its subset of choice. Despite some silly level design (and spawn points that stick you in instant-frag situations), the fun weapons and vehicles prevail through brute force—no apologies or excuses.
But I'm left with the same questions I had when Halo 2 for PC was first unveiled to thunderous confusion: Why Windows Vista? If the answer really is just GFW Live, then why no cross-platform play, when the game would clearly benefit from the immense Xbox community? If it's as simple as technical constraints, then why even bother? A game this simple shouldn't be so damn puzzling
0 comments
Email ThisBlogThis!Share to TwitterShare to Facebook

Harry Potter and the Chamber of Secrets

Freedom Force vs. the Third Reich

Gabriel Knight 2: The Beast Within

Emperor: Rise of the Middle Kingdom


View to Full
4 comments
Email ThisBlogThis!Share to TwitterShare to Facebook

PC game / Gamers must explore the worlds of Far Far Away in Shrek the Third as they track down and face Prince Charming. Adventuring through 20 levels including the Academy Grounds, the Evil Queen's Castle, and the Pirate Ship, players take the role of Shrek, Puss-in-Boots, Princess Fiona, Arthur, Sleeping Beauty, and Donkey to solve puzzles, overcome obstacles, and take down the evil prince's henchmen. Gamers will utilize such special moves as "Ogre Power," "Flying Kick," "Swoon," and "Cute Puss" to complete each stage. There are a variety of challenges including three princess levels found within the single-player story line, and players can compete with friends in "Castle Attack," "Shrekleboard," "Catacombs Leap," and "Ships Ahoy" among other multiplayer mini-games.
0 comments
Email ThisBlogThis!Share to TwitterShare to Facebook
PREVIOUS NEXT