PC game / Based on the 2007 film, Transformers invites gamers into a world of mechanized shape-shifters called the Autobots and the Decepticons. By selecting an alliance, gamers will work their way through one of two campaigns and ultimately decide to defend Earth or watch it burn. As a robot, players experience combat in seven fully destructible environments as they attempt to complete objectives and missions including destroying drones. When gamers are in car form, they can compete in a variety of point-to-point races. Optimus Prime, Megatron, Starscream, and Ironhide make a return in the game, and players can shift from vehicle to robot on the fly.
0 comments
Email ThisBlogThis!Share to TwitterShare to Facebook

SOMETHING HAPPENS ALONG THE WAY; MOU BET ATTACHED TO THE LITTLE GUYS

year:07 - review: Being evil? Hell, that's easy. Letting players unleash their id and make 'em laugh at the same time? That's the hard part Yet, between ordering the demise of countless sheep and gutting rabid unicorns, that's exactly what's happening in third-person action-adventure Overlord.
Many games try dangling that cause-and-effect karmic pendulum, yet it rarely fazes; you don't care what happens. Embracing that Overlord essentially says. "Go on. Be the most insufferably evil bastard on the planet and we won't punish you any more than we would if you actually decided to help people" Saving the town's food supply is an option, sure—the people will give you a hero's welcome. On the other hand, hoarding the stash and killing witnesses can lead to additional side quests...like, say kidnapping women to create your own harem. Since evil deeds unlock so many more cool options, the challenge becomes doing the 'right" thing (achieving a zero-percent corruption rating's easier said than done).

THE POWER BEHIND THE THRONE
Still, Overlord isn't really about the overlord. Yes, you can buy weaponry or kit the castle with everything from torture gear to coffee tables, but your gang of adorably sadistic minions steal the show. Point in a direction and let 'em go; they know to attack targets, loot the area, or move objects...and if you're low on health, your subjects willingly jump into a nearby shrine and die to restore you At first they're fodder to fling into fights, consequences be damned, if they die, you just call up more. Something happens along the way, though: You get attached to the little guys.
You want to keep that pumpkin-headed, dress-weanng imp alive—not only because you've had him since the beginning, but because new gear means a more powerful minion. Besides, the aforementioned "meat grinder" strategy only works for so long. Tactics eventually come into play with new minion types: Reds hurl fireballs, greens excel at stealth, and blues hang back as healers. Suddenly, combat requires more finesse than just throwing those brown scrapper minions at every dilemma.
The problem is that you need finer control than the keyboard-and-mouse setup offers. Play enough battles requiring simultaneous attacks from a gremlin horde and your antihero, and you'll notice a huge difference when using a gamepad As is now becoming standard. Overlord maps its controller layout to the ubiquitous Xbox 360 pad—the left stick moves the master, and sweeping the right stick gives total control of the minions. So if you don't already own a gamepad, add that to the price tag.
Your flunkies also embody Overlord's one weak point: Loosen the iron grip, and they'll stupidly drown themselves chasing after a bug..or race headlong into overwhelming odds. Maybe the boneheaded A.I. is intentional; maybe they're supposed to be feral lemmings, and the game's forcing you to slow down for tactics—but I ain't buying it. With a throng of mischievous pets as the game's centerpiece, you'd expect 'em to be a little better housebroken. I lost track of how many times I voluntarily restarted from a checkpoint to keep one dopey ubergremlin alive. Then again, any game that makes me want to restart—rather than making me hove to restart— can't be all bad.
0 comments
Email ThisBlogThis!Share to TwitterShare to Facebook

PC game / Step back in time as you take the role of wheelman in Driver: Parallel Lines. Beginning in the late 70s, your character enters prison for 28 years and is released into the world in 2006. You must work your way through 35 missions as you explore present day New York City. There are over 80 different vehicles to customize as you wish including cars, trucks, and motorcycles. 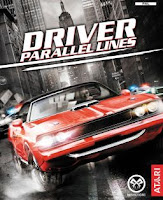