PC game / This historical war game features both long-term empire building and real-time combat. The game is set in the heart of the Dark Ages, between the 11th and 15th centuries, and features hundreds of historical battlefields from western reaches of Europe to the northern tip of Africa. Players can choose to lead the English, the French, the Byzantines, the Turks, or one of eight other rising nations. Special campaigns allow players to take the roles of famous figures, such as Richard the Lionheart or Joan of Arc, and follow historical movements like the Crusades, the Mongol Invasions, and the Hundred Years War. The game's 12 playable factions feature over 100 unit types each and battles can involve as many as 10,000 troops. 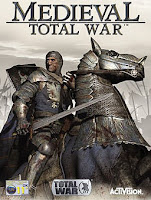 Medieval: Total War is based upon the building of an empire across medieval Europe, North Africa and the Middle East. It focuses on the warfare, religion and politics of the time to ultimately lead the player in conquest of the known world. As with the preceding Total War game, Shogun: Total War, the game consists of two broad areas of gameplay: a turn-based campaign map that allows the user to move armies across provinces, control agents, diplomacy, religion, and other tasks needed to run their faction, and a real-time battlefield, where the player directs the land battles and sieges that occur.

PC game / Having rid himself of the death curse and saved the Ankh from the hands of Osiris, the wicked God of the Underworld, Assil has now woken up in the dingy back streets of Cairo with a blinding hangover only to discover the Ankh is missing! With no time to lose, Assil must recover the Ankh and ensure that it doesn’t fall into the hands of Osiris; to do so would be a catastrophe enabling him to launch his own fiendish plan.

PC game / In 2334 AD, a descendent of Albert Einstein attempted to separate the good and evil present in humans into two different types of cells - the Black and White angels. The Black angels gave rise to

special human cyborgs called CREATESE, while the White angels gave rise to the INTELION. Now the CREATESE, INTELION and the last Humans (HOMINIAN) on earth have to fight it out for their own land

Choose your race INTELION, CREATESE or HOMINIAN and battle to save the earth and your race in Single, Custom or Multi-Player in Melee, Fusion, Survival or Fusion Survival Mode.

* Multi-play support for up to 8 players through IPX or TCP/IP.
* Use of battle formations.
* Human technological interface.
* Game-Play recording.
* Character level-up system.
0 comments
Email ThisBlogThis!Share to TwitterShare to Facebook
PREVIOUS NEXT