review: Everyone would want to play Saving Private Ryan’s Daniel Jackson; the sharpshooter’s
superhuman efficiency under pressure guaranteed it. And I’m sure the private’s last stand was
on Steven Spielberg’s mind as the director inked the DreamWorks Interactive deal that put Medal of Honor on shelves in 1999, one year after Ryan’s box-office debut. Only, when Jackson’s Springfield rifle went click-clack-boom, somebody died. When I shoot Jerry, he as often as not does a jack-in-thebox number. 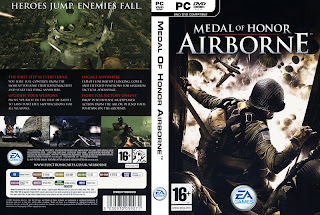 Games drawn from history don’t have to be realistic. This isn’t that argument. Saving Private Ryan took liberties with the truth, too, though the difference is that of Jackson forgetting to rezero his rifle sights and still shooting a German sniper straight through his own scope, and Medal of Honor: Airborne’s Gestapo men who step from a train, firing MG42s from the hip like jackbooted John J. Rambos. But Spielberg’s war movie, alongside HBO miniseries Band of Brothers, established today’s authenticity trend—to the extent that anything less looks like yesterday’s kitsch. And MOH certainly isn’t advertised as a John Wayne film, let alone a Captain
America comic. As Brothers in Arms and Call of Duty challenge MOH by inching further along the believability spectrum, it’s impossible to imagine an anonymous EA level designer sneaking the Red Skull and assorted superstormtroopers into the game—while, elsewhere, advertising material touts the studio’s “commitment to historical accuracy and authenticity.” However it happens, the people marketing the game aren’t making it, and—just maybe—aren’t even playing it. That’s too bad, though; Airborne is a good game.

year:93 - PC game / Duke Nukem II is everything you'd want from an action game. An incredibly sophisticated game engine gives this high-action game the power needed to 'nuke' your computer! Duke blasts his way through your screen with enough firepower to wake your neighbors.

The original Duke Nukem, released June 1991, soared to the top of the Shareware Top 10 list, where's it's been camped for 22 straight months--no other shareware program (of any type) has been this enduring and popular. But the reason for Duke's extraordinary success is simple: It delivers the action players love, with state-of-the-art animation and graphics. The new Duke Nukem II once again sets the new standard for arcade/action games.

In this latest saga, Duke Nukem, while being interviewed on TV about his best selling book, "Why I'm So Great", is suddenly abducted by aliens. Duke's alien captor explains that Duke's brain will be drained of all his knowledge, which will be used to formulate a master plan to seize control of Earth. Duke has two choices: He can be turned into a zombie by the EncephaloSucker, or 'kick-butt' like there's no tomorrow!

You guessed it! Our hero is ready for action. Duke must escape his alien prison cell, then battle to end the hideous plans of the Rigelatins.
0 comments
Email ThisBlogThis!Share to TwitterShare to Facebook

the Hell in Vietnam

PC game / In October 1967, having spent some time training at a school for special forces in Nha Trang, I was transferred to a temporary military base in Don Dien, as the leader of a distant recon squad of four men. We all had been in service for long, trained in sabotage, communication and intel. We were invisible to those who themselves tried to be invisible. We were the assassins of killers. Ready to bite. Yet, the winter offensive of North Vietnam army smashed our teeth.

In 1968, a base located on the hill outside Don Dien found itself on the marching route of a regular communist army, preparing for the strike on the ancient, imperial city of Hue - the Binh Tri Thien province capital.

Al. Capone used to say that you can win more if you supplement outspoken words with a gun. We were not trained to give speeches. As for the guns, we had plenty of them...
1 comments
Email ThisBlogThis!Share to TwitterShare to Facebook
PREVIOUS NEXT