review:The good news: The revolutionary Skill Stick feature, a concept introduced on the Xbox 360 last year, finally makes its way to the PC version of EA’s NHL franchise. The bad news: just about everything else. The truth is, NHL 08 plays a decent game of hockey…as it should, considering the nearly 15 years that EA’s had to purportedly refine it (and thusly force every competitor into early retirement). But how did PC hockey fans become secondrate? Last year, we were deemed unworthy of both the Skill Stick feature and that brainmelting “next-gen” graphics engine. This year, while EA fawns all over the PlayStation 3 and Xbox 360 crowd with even better graphics and innovations such as dynamic A.I., practice modes, enhanced Skill Stick capabilities, and a nifty system whereby you can develop and record custom plays, PC gamers get to languish in the very same “last-gen” technology reserved for the ancient PS2. If this sounds like sour grapes, it is. It may be damning with faint praise, but NHL 08 does offer a few token upgrades. Apart from the nifty Skill Stick, which transfers the majority of hockey-stick functions to your gamepad’s analog thumb control, the game delivers American Hockey League and European Elite league integration, reintroduces a playoff-only mode, and adds minor Dynasty enhancements. Otherwise, it looks the same, plays perhaps moderately better (the star players are just that—and the advantages of smart positional hockey are evident), and brandishes the same clumsy, ported menu interface of recent efforts. If you’re a complete hockey newbie, prepare for some fun. If not, dredge up last year’s copy or borrow your buddy’s 360.•
0 comments

All players looking for real-life car racing emotions are sure to be satisfied, while inexperienced gamers whose contact with the racing genre was limited to street racers will be able to broaden their perspective with this new, extremely dynamic title.
0 comments 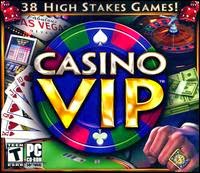 Try your luck at 38 games of chance in Casino VIP from budget publisher ValuSoft. Featured titles include Texas Hold 'Em, craps, seven-card stud, blackjack, roulette, baccarat, five-card draw, and slots. Each individual game offers a fixed view of a felt-lined table or a coin-operated machine. Personal statistics are tracked for each game, and your starting bankroll can be adjusted along with a number of other settings. In-game hints and tips are also included to help improve your skill.