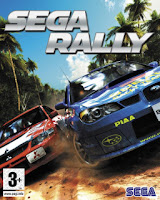 PC game / rFactor (tm) is a racing game featuring the latest graphics technology excellent multiplayer, fine vehicle dynamics, and support for a wide variety of racing formats. rFactor ships with two race series - the SR Grand Prix which includes a range of road cars and the Open Wheel Challenge which features dedicated racing vehicles from 4 to 10 cylinders. Both series include a mix of oval, road, and street courses. 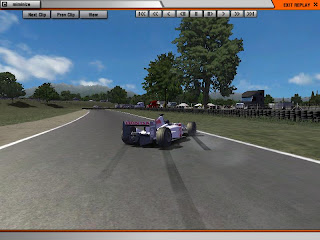 PC game / Secret missions are waiting for an elite pilot in Blazing Angels 2 as gamers fly through dangerous landscapes and weather to ruin Nazi plans for an experimental super-weapon. Gamers travel through the skies of Paris, Rome, Moscow, Rangoon, and Cairo to defeat the Axis powers with advanced weaponry and aircraft from WWII including high-velocity cannons and guided missiles. Online, players may enter multiplayer challenges such as "Capture the Flag" and "Epic Battle" modes for competitive and cooperative action.
0 comments
Email ThisBlogThis!Share to TwitterShare to Facebook

pc game/ Hoo boy. If you're one of those folks who's morally opposed to Ihe idea of porting games from consoles to PC. you're gonna want to stop reading now—continuing will only make you angry.
Are they gone? OK, look: This version of Stranglehold is a near-direct port of the Xbox 360 version. It's all but identical, and because of that it's missing some of the necessities PC gamers take for granted. For example, you might notice that the minimum system requirements seem unusually high. That's probably because Stranglehold offers almost no video customization options, so you can't really dial back the system demands to let this thing run on older gear. But the odd thing is the lack of gamepad support: The game doesn't even support the wired 360 controller, which seems like a no-brainer—not to mention, it defies the logic of the aforementioned console-centric foibles. 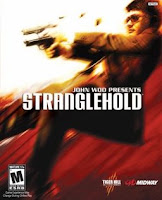 BUST IT UP
If you can suppress the feelings of righteous indignation prompted by the shamelessly skimpy nature of this port, Strangleholds a pretty good time while it lasts. This sort-of-sequel to director John Woo's seminal action flick Hard Boiled features a virtual Chow Yun-Fat reprising his role as Inspector "Tequila" Yuen, tearing things up in trademark dove-filled Woo fashion (no surprise there; Woo collaborated on the game). The ability to blast the living hell out of every environment is undeniably satisfying, a feeling that lasts longer than it has any right to—probably because you keep walking around thinking. "Can I destroy that? Why, yes! Yes I can! How about that? Why, yes1."
And Tequila's absurd gun-toting acrobatics are also plenty satisfying...when they work. This is one of the game's biggest problems: See, in order to interact with the environment—like by sliding down a banister, flopping on a rolling cart or swinging from a chandelier—you first have to aim at an object and wait for the white glow that signifies it can be used. Trouble is, triggering these objects is frustratingly unreliable. Sometimes you're too close, sometimes you're too far away, and sometimes iljust won't work. So Stranglehold often (not always, but often) loses its balletic potential when what should be a string of supercool slow-motion moves is broken by the finicky nature of the interactive objects.

WASN'T I JUST HERE?
The often-dull level design's also problematic While certain areas stand out—an active demolition site is one shining example, as is the final level, set in a sprawling estate—many of the maps feel distressingly similar to one another. You could make the ar

gument that the focus should be on the interactive and destructible objects within the levels rather than the level structures themselves, and I'd agree with you. Trouble is, the glitchy nature of the interactive objects means that you're not likely to exploit them, and thus the levels don't become the free-form playgrounds they were probably intended to be.
Stranglehold packs some impressive tech; the power to positively flatten nearly every object in a level offers a certain charm And for the eight hours or so you'll spend playing through the story, it's reasonably entertaining. But with such unreliable environmental exploits, the game devolves into little more than a stylish, mindless, unusually destructive shooter.
0 comments
Email ThisBlogThis!Share to TwitterShare to Facebook

Review: Of the many grand “what if?” scenarios of history, perhaps none captures the popular consciousness more than “what if socialism hadn’t failed?” Two of the most enduringly popular alternate-history fantasies (or nightmares, depending) are those in which either national or just plain ol’ socialism continues to exist and thrive. Philip K. Dick’s novel The Man in the High Castle is the most interesting take on the “Nazis win” version. But it may surprise some people to find that a computer game—namely Massive Entertainment’s new World in Conflict— features the most compelling exploration of the “Commies win” (or, more accurately, “Commiesdon’t- go-down-without-a-fight”) scenario. 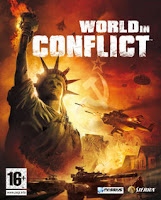 WOLVERINES!
Like any good epic, WIC starts in medias res— circa 1989. Rather than allow perestroika to turn
it into a capitalist society, the U.S.S.R. decides not to go gently into that good market economy.
Without warning, a Red Army blitzkrieg (into Germany, appropriately) sends Europe reeling
like it hooked a 20-pound bass. U.S. forces scramble to help, but no sooner do they secure
the European front than the Russians get all Pearl Harbor on downtown Seattle. Lt. Parker—your alter ego—straps on his M4 Carbine and jumps into the defense of the Pacific Northwest.
Of course, it’s not called World in Conflict for nothing. Once you’re done making sure the grunge movement goes off without a hitch, the game transports you to France, Germany, Russia, and finally New York City. Along for the ride is a cast of eminently relatable (if a tad clichéd) supporting characters…and a surprisingly compelling, John Milius–worthy plot. Pair strong
storytelling with topographically realistic terrain, destructible buildings, and weather and weapon effects worthy of ILM, and you’ve got yourself an honest-to-goodness cinematic experience.
GLOBAL THERMONUCLEAR WAR
Still, all the nifty graphical effects in the world won’t get a game anywhere without compelling gameplay, and WIC’s got one of the most innovative RTS models since M.U.L.E. Evolved from the highly regarded Ground Control series, WIC does away with the standard whip-the-peons resource accruement regime, instead providing you with an ever-recharging pool of logistical “points” with which you simply buy units. If your boys get pureed, you get their initial cost reimbursed to your pool. No tech tree, no production cycles, no rock-paper-scissors unit breakdowns—you just buy what you think you need and go at it. more...>
1 comments
Email ThisBlogThis!Share to TwitterShare to Facebook

PC game / Rise & Fall: Civilizations at War is a detailed real-time strategy game that
lets players completely command one of the four mightiest empires of the ancient world: Greece, Rome, Egypt, and Persia. Rise & Fall is the first real-time strategy game to place players directly in the heart of combat as a heroic general fighting side-by-side with their troops as one of history's
eight greatest heroes battling to bring victory to their nation on the battlefield.
0 comments
Email ThisBlogThis!Share to TwitterShare to Facebook
PREVIOUS NEXT