PC game / Culpa Innata from Strategy First, presents a story about a World Union citizen is murdered in Russia, one of the few remaining Rogue States. This murder oddly coincides with the accidental death of a prominent professor in Adrianopolis, an important border town between the World Union and Russia. Peace Officer Phoenix Wallis is assigned to lead the investigation of the murder.
0 comments
Email ThisBlogThis!Share to TwitterShare to Facebook

PC game / The Witcher combines spectacular and visually stunning action with deep and intriguing storyline. The game is set in a world created by best-selling Polish author Andrzej Sapkowski. The world shares many common features with other fantasy lands, but there are also some distinguishing elements setting it apart from others. The game features the player as a "Witcher", a warrior who has been trained to fight since childhood, subjected to mutations and trials that transformed him. He earns his living killing monsters and is a member of a brotherhood founded long ago to protect people from werewolves, the undead, and a host of other beasts. It's an action oriented, visually stunning, easy to use, single player RPG, with a deep and intriguing storyline.
0 comments
Email ThisBlogThis!Share to TwitterShare to Facebook

PC game / NBA Live makes its PlayStation 3 debut with a new, dynamic broadcast-style camera angle that displays the on-court action primarily from the sidelines. A number of "go-to" moves are available to distinguish star players from their less flashy teammates, while a post-game highlight reel shows off key plays from multiple perspectives. The controls have been streamlined in several key areas, thanks in part to a context-specific system that takes into account where the ball-handler is in on the court, his proximity to other players, and his distance to the basket.

While many moves are situational, players have direct control over dribbling with the new "quickstrike" ball handling system. Instead of tapping a button and waiting for an animation to complete, players can link together multiple moves without pausing. The right analog stick is used to perform signature-style moves and combinations, with players rocking the stick left and right to perform crossover dribbles and other techniques. The speed of each analog motion also influences the intensity of each move, giving players more flexibility during possessions.

In addition to the standard dynasty, season, and exhibition matches, players can compete in the FIBA World Championship as one of eight international teams or as any of the 30 NBA squads. Rebounding and ball physics have been tweaked from previous games, while the new "hot zones" feature incorporates actual NBA shooting data to make certain areas of the court more or less successful based on a player's real-life tendencies. Marv Albert and Steve Kerr reprise their commentary duties, with additional lines of dialogue dedicated to events such as free throw attempts, signature shots, and more.
0 comments
Email ThisBlogThis!Share to TwitterShare to Facebook 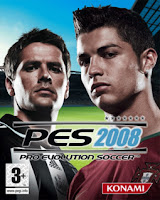 PC game / PES 2008 features a brand new intelligence system, called Teamvision, that adapts and reacts to players own gameplay styles to ensure that the computer controlled opponents are always challenging and forcing the player to think and chance their style of play to avoid being out-thought by the game. It learns counter attacks that target your weaknesses and look to exploit any repetitive tactics players use. Defenders react better to danger, closing down the ball and charging at shots and the goalkeepers hold shots that are closer to them as well. Teammates make more intelligent runs into space and the close control has been sharpened to ensure quick and fluid passing and speedy attacks can be built. The next gen versions also feature extensive edit modes so players can completely customise their PES 2008 experience.
System Requirements: Intel Pentium 2.0 GHz, 512MB RAM, 128mb Graphics Card
0 comments
Email ThisBlogThis!Share to TwitterShare to Facebook
PREVIOUS NEXT