Avencast: Rise of the Mage

PC game / In the magic kingdom of Aldgarth, demons tore up a dimension portal and
invaded your academy... Now a forgotten demon army is about to descend on your world... Descend into the depths of a sunken civilisation.... Fight the mighty Demon Marshal Morgath, forged from the crystals of the Gods.

PC game / Developed by the Danish studio Sirius Games, “Escape from Paradise City” is an explosive mix between RPG, management and Real-Time Strategy. The game action takes place in a vast city, superbly rendered and bustling with life: Paradise City.

It is also one of the most dangerous cities in the world, where various mobs and numerous gangs clash in the struggle for control of the city’s districts and resources.

In an atmosphere that combines the underworld and the fantastic, the player will be required to infiltrate the gangs of Paradise City for the NSA (National Security Agency).
The character the player chooses to incarnate will develop as he claws his way up the echelons of the underworld.

PC game / Based on the upcoming DreamWorks Animation movie written, produced by and starring Jerry Seinfeld due out this fall, Bee Movie Game lets players race, chase and fly their way through an adrenaline-fueled world of adventure as they experience the hilarious antics of Barry B. Benson, a dynamic and daring bee who knows there is more to life than making honey.
0 comments
Email ThisBlogThis!Share to TwitterShare to Facebook

PC game / Righteous heroes are sent to hell and -- hopefully -- back again, in Hellgate: London, a combat-heavy game with deep, RPG-style character development. From a perspective more common to 3D shooters, players guide supernatural savants and modern-day Knights Templar to battle against an eruption of demons into our realm, using swords, summoning, and spiritual fortitude, in the hope of keeping one small corner of Earth a safe shelter for humanity's continued existence.

In the year 2020, the forces of hell launched an invasion into our world, intent on claiming it for their own. They were successful. By 2025, London is a wasteland of broken buildings and lifeless landscape. Dubbed "the burn" by survivors, the devastation of the city is part of the demons plan to literally create hell on Earth. Some hope to stop the devastation by awakening the power of an ancient artifact called "the sigil." Others seek to harness the great power of the demons for their own purposes, instead of eliminating the threat outright.

PC game / TimeShift is a futuristic first-person shooter that has, as the title suggests, players manipulating the flow of time. The game's lead protagonist is Colonel Michael Swift, who wears a sophisticated outfit called the Quantum Suit that grants him his time-altering powers. The story line has Swift trying to fix the global changes he unwittingly set off while working on behalf of the government, making him a hostile target of his former employers. While advancing through the game's exterior and interior environments, players can slow time in order to sneak past defenses, disarm enemies, and avoid traps. Time can also be stopped entirely or reversed, allowing players to solve puzzles and to overcome overwhelming odds. The game includes over 30 single-player levels as well as online support for up to 16 combatants in a choice of multiplayer modes. 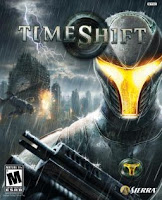 The key feature of TimeShift is the player's ability to control time: slowing, stopping or even rewinding time more or less at will. This allows a player to stop time to dodge an incoming projectile or steal an enemy's weapon. Specific time-related puzzles also require these abilities. The player's abilities also affect the color of their environment in such that slowing time produces a blueshift, rewinding it produces a yellow haze, and stopping time creates a white filter "haze". The player must use them wisely to make its way through the game. In some parts of the game the time powers are lengthened.
1 comments
Email ThisBlogThis!Share to TwitterShare to Facebook

PC game / The dark Painkiller universe heads off in a new direction in Painkiller: Overdose. The game is still a fast-paced first-person shooter, but instead of battling demons with series protagonist Daniel Garner, gamers take on the role of Belial, a half-angel, half-demon dealing with the repercussions of Garner's defeat of Lucifer. Players can equip themselves with eight new demonic weapons, and blast their way through 17 new levels filled with dozens of beatly monsters. Giant bosses face gamers at the end of every stage, but a new Tarot deck offers new powers and attack combinations to give Belial a fighting chance.
1 comments
Email ThisBlogThis!Share to TwitterShare to Facebook
PREVIOUS NEXT