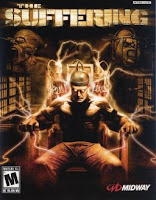 PC game / The player controls the prisoner Torque, a hardened inmate in his late 20s, sentenced to die for a murder he may or may not have actually committed. Underneath Torque’s tough exterior hides a man who is not quite psychologically balanced, who fears far more than he would ever admit to. As a side effect of his mental instability, Torque has flashbacks to the events from his past, throbbing images that depict the events that lead up to the crime for which he was imprisoned. Torque is also subject to black outs where he becomes extremely violent and transforms into a massive monster hell-bent on destruction.

The Suffering plays as a traditional first or third-person shooter, employing the controls of the former but allowing players to switch between the two camera angles. The weapons provided to the player are reminiscent of those found in prisons: shivs, revolvers, Molotov cocktails, and a wide array of less common weapons.

PC game / Yet the game's biggest addition in an online component where members of shadowy Black Ops squads are sent to tackle team-oriented missions. While players cannot select Sam Fisher for online action, they will be able to select from an assortment of male and female operatives all skilled in the art of stealth. Enemies may abduct players and use them as hostages, requiring fellow operatives to quickly de-escalate the situation or risk losing a member of the team. Unlike the original Splinter Cell, which began as an Xbox title and was later ported to PlayStation 2, GameCube, and PC, Pandora Tomorrow is designed as a multi-platform game from the start.
0 comments
Email ThisBlogThis!Share to TwitterShare to Facebook 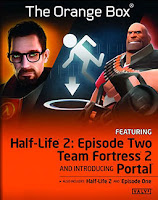 PC game / Half-Life 2: Orange Box for next-gen consoles includes 2004's critically acclaimed Half-Life 2, its first two expansion packs, Episode One and Episode Two; the standalone puzzle game, Portal; and the team-based multiplayer title, Team Fortress 2. Half-Life 2 continues the saga of scientist Gordon Freeman, who finds himself in a world overrun by an alien army known as the Combine. One of the key features in Half-Life 2 and its expansions is the use of physics to interact with the environment, whether it's pushing cinder blocks to create a staircase or using a gravity gun to hoist and then slam objects into enemies. Freeman will also be able to interact with several friendly characters as well as drive an assortment of vehicles while on his quest to defeat the Combine.
0 comments
Email ThisBlogThis!Share to TwitterShare to Facebook 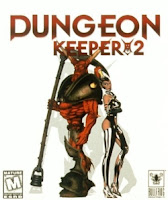 As in the original, the player takes on the enigmatic form of a large floating green hand which moves around the map picking things up, dropping them, casting spells and interacting with specific items. The game interface is blended between a large panel at the bottom of the screen and interactive items in the world. For example, the buttons to select which room, door or trap to build or spell to cast are in tabs on the panel and are then dropped into position in the world. Locking and unlocking doors or activating items is done by clicking on the item in the world. Disabling imprisonment of enemy creatures is done by clicking a metal bar next to the prison door, barricading it closed. 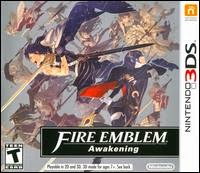 Nintendo and Intelligent Systems team up once again to bring gamers Fire Emblem: Amakening, the first 3DS title in the long-running strategy RPG series. Players can create their own unique character and then battle alongside a prince named Chrom as he gathers a group of vigilantes, known as the Shepherds, to help him protect the Kingdom of Ylisse from a dark dragon and its army of undead soldiers. Combat takes the form of classic turn-based grid battles, with gamers moving their party around the 2D grid to attack foes, and battles playing out in 3D.

In between battles, players can move freely through an overworld map to meet new characters and purchase items for use in combat, and animated cut-scenes helps flesh out the game's narrative. There are dozens of characters to meet and command, each with different skills and jobs, and groups can form bonds with one another as they battle, with some characters potentially marrying each other. Online options include local co-op multiplayer, StreetPass and SpotPass data swapping, and the potential to download new missions and characters.

Features
Join a prince and his vigilantes as they attempt to fend off a dark dragon and its army of undead soldiers
Meet dozens of different characters, each with unique skills
Form a party and engage in classic turn-based grid battles