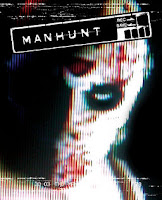 PC game / Each gang employs different tactics to snuff out players: some will wait in the shadows, while others use heavy artillery. Players can fight back with hand-to-hand moves, guns, or perform stealth kills using such items as meat cleavers, plastic bags, and hammers to slice, suffocate, and bludgeon enemies.

Gameplay:
Manhunt is a third-person stealth horror game. The game consists of twenty levels, and four bonus levels that can be unlocked; the levels are referred to as "scenes". Players survive the Scenes by dispatching enemy gang members known as "Hunters", occasionally with firearms but primarily by stealthily executing them in gruesome, over-the-top ways.


The player is rated at the end of each level, primarily dependent on the gruesomeness of the killings and the speed of completion, from one (unimpressive) to five (extremely competent) stars. Executions are preferred in order to gain a higher score, thus encouraging players to play as viscerally as possible. The game's locales are full of "dark spots" and shadows where the player can hide while being chased by the Hunters; hiding in these dark areas makes the player invisible to opponents.

Over the course of the game, the player uses a wide variety of weapons, ranging from plastic bags, baseball bats, crowbars and a variety of bladed items to firearms later on in the game. If the player is running out of health, painkillers can be found which replenish health. The player can strike walls or throw items such as bottles, tin cans, bricks and severed human heads in an attempt to distract the Hunters.

Manhunt also makes use of the PlayStation 2's optional USB Microphone and the Xbox Live microphone feature on the Xbox version of the game. When such a device is connected, the player can use the sound of his or her own voice to distract in-game enemies. This in turn adds a new twist to the stealth elements, as the player has to refrain from noises such as talking or coughing, at the risk of creating in-game noise.