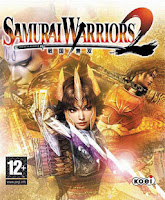 Gameplay:
The gameplay of Samurai Warriors 2 builds on the first Samurai Warriors by adding new characters and new features, such as the removal of the traditional range attacks in favor of the addition of two unique special abilities that differ from character to character. For example, Oichi can either summon new soldiers to the battlefield or improve the combat abilities of nearby allies, Yukimura Sanada can either whistle to call his mount to his side or perform a flaming charge, and Ginchiyo Tachibana can either increase the strength of her weapon or summon lightning to stun nearby enemy soldiers. In addition, characters movesets can evolve in a larger variety as they level up, elaborating on either their combo, charge or special attacks, with the progression of each character being different from the next. This leads to the characters having 1 of 3 different button combos.


A returning element from the original Samurai Warriors is the Survival Mode (Infinite Castle in the Japanese version). In this mode, the player chooses a character and fights through an endless castle. After choosing the character, 4 random missions will be given to the player to choose from. To choose a mission the player must pay a fee to perform the mission, though there are certain missions that do not require a fee. After that, the player enters the castle, and a mission will be triggered. After succeeding in the mission, the stairway to the next floor opens, and the player will be able to proceed to the next floor where there will be another mission to complete in order to proceed to the next floor, and so on.

Playable characters in the game (except for Ranmaru Mori and Okuni) have their own stories. Each story contains five stages (except for Ieyasu Tokugawa and Mitsunari Ishida, who both have six stages), plus a "Dream Stage" or "Gaiden" (Side Quest) in the Japanese version, that effectively asks "what if". For example, Yukimura Sanada's Dream/Gaiden stage (Battle of Sekigahara) puts him into a battle that took place historically between his fourth and fifth stages (Ueda Castle and Osaka Castle respectively). Correspondingly, since Mitsuhide Akechi and Nobunaga Oda both have endings where they won their historically final battles and survived, their Dream stages have them mopping up their gathered opposition.