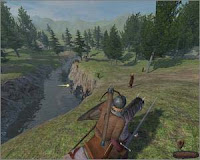 For the Author of the Topic
this is a really nice game
you just have to watch for who you work for.
for example:
only do favors for villages if you want them as a fief
start with guild masters "the easiest missions"
then when level 5-10 and have 20-30 take some jobs from the lords.
go to tournments for money.
and don't bother with the arena.
equipment is bought once so mark up high all the way.