review:
The graphics are amazing. Not perfect and there are certain times where I wonder if it will crash when it pauses for a bit, but its still, just utterly [Role-Playing] breathtaking. -Conversations are smoother this [Role-Playing] time around. It feels like i'm actually speaking to someone instead of standing there like a do 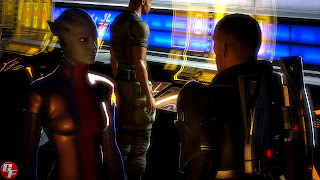 lt without saying a word until 3 minutes later. If I were [Role-Playing] talking to somone who took 3 minutes to respond, I would've ditched them already. -Its not strictly black and white [Role-Playing] when it comes to choices. You actually have to be able to make decisions based on logic or preference or how you deem your character [Role-Playing] would react. You can be both Paragon or Renegade to a certain extent on the meters. Neither decreases the points of the other. -The abilities and weapons are great. Being able to throw people out floating in thin air or warping their insides is more satisfying than just running up to an NPC with horrible AI and shooting their face off. -Customization of your own character is endless. Not the depth of Oblivion(Which drove me nuts, took me at least 3 [Role-Playing] hours to make a perfect face) but enough to make your character truly unique. What I loved the most was the makeup and the scars you could put on her face. (Never really created a male shep before but have tried). -Main missions are interesting and well designed. I guess the only downside would be that they are so awesome that the next time I replay this game i'd probably skip all the side quests and go for the main plot everytime. -The other characters are neat and have the funniest lines! Even just an NPC that you would encounter somewhere could hold the wittiest banter you could ever hear in a game. Most of them don't all look the same and the gestures aren't overly repetitive. -The music is epic. Not much else to say about it. Its not cheesy and portrays the events hapening or about to come perfectly. -Environments for the main missions are spectacular. It went from caveish, to ruiny, to snowy and then tropical. I looked forward to the next one everytime. -Controls are easy to learn and combat situations require some degree of thought before entering. Can't just charge and blast anymore, have to know what weapon to use, who to use and what to do tactically. A few complaints that make this game a 9 for me: -The side quests. At first, I thought some of them were cool, but after a while they got repetitive. Each side quest planet had things to collect and seemed very bare. I understand they were considered poorly populated worlds, but couldn't we see where the Turians or Volus live for example? Just a little peek? -More interaction between companions. I mean, they did talk to each other once in a while and I did get the sence that(for example, Kaidon and Ashley talked to each other like they were old pals) but what about the others? Need some arguments or some jokes, something so that you know they acknowledge each other as more than a face they see every 4 days. -The option to turn on your companions in the end. I wouldn't pick it on my first playthrough, but it would be nice if it was there for my second. A renegage would most likely abandon their friends and go where the money or the power takes them. Other than that, this is a revolutionary RPG/Action game. I'm looking forward to playing through it and getting a couple of the acheivements in there. Can't wait for ME2!
Email ThisBlogThis!Share to TwitterShare to Facebook