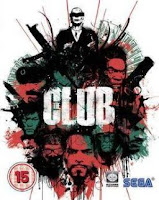 PC game / In the tradition of such films as The Running Man, Hard Target, and Surviving the Game comes The Club, a fast-paced underground "sport" featuring a kill-or-be-killed objective. The world's most affluent citizens are gambling on various fighters to survive a battle of attrition. The game's eight combatants have their own personal motivations for competing, as they attempt to rocket through the ranks using whatever means necessary. Characters can be equipped with a choice of 17 weapons, ranging from automatics and sniper rifles to submachine guns and pistols.

Eight atmospheric locales include a factory, steel mill, prison, ocean liner, and other abandoned areas from across the globe. Objects found within the environments can also be used to a character's advantage. Players are able to challenge up to seven rivals online or choose from the following five solo modes: Sprint, Time Attack, Survivor, Siege, and Run the Gauntlet. Eight distinct multiplayer modes are available as well, each featuring a cumulative score-based system used to unlock new weapons, characters, and maps. Developer Bizarre Creations' previous titles include Geometry Wars and Project Gotham Racing.
0 comments
PREVIOUS NEXT Home