description: Return to the underwater city of (fpstr) Rapture in this anticipated sequel to 2007's critically acclaimed fps. (fpstr) The player takes the role of "Subject Delta", the first Big Daddy (fpstr) and prototype 4 the Big Daddies seen in the original game. (fpstr) The character possesses superior speed & (fpstr) intelligence to other Big Daddies, as well as free will.(fpstr) As such, the player uses the (fpstr) Big Daddy's drill and rivet gun as weapons (fpstr)as well as some other weapons found across Rapture, though the drill (fpstr) does run out of fuel. The weapons in the game will have (fpstr) several types of ammo, similar to the first game. (fpstr) Alternatively, in contrast to other Big Daddies, (fpstr) the player may also use (fpstr) plasmids, while "upgrade trees" will provide (fpstr) unique ways to upgrade them. (fpstr) A new feature added is the ability to dual-wield plasmids (fpstr) and weapons at the same time. (fpstr) Further Big Daddy abilities found in the first game, (fpstr) such as performing a shoulder dash, will also be an option. 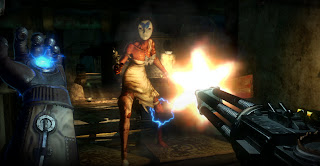 
Bioshock vs Bioshock 2
Email ThisBlogThis!Share to TwitterShare to Facebook