A pilot named Will flies into (tdp3D) the Bermuda Triangle and is transported to a futuristic (tdp3D) dimension in Capcom's Dark Void. Populating this strange (tdp3D) land are slug-like enemies (tdp3D) residing in humanoid suits of armor. (tdp3D) These creatures, knovn as the Watchers, desperately want to invade & conquer Earth. They are being held in check by a ragtag (tdp3D) group of humans called the Survivors.
Features
* Collect red orbs from defeated enemies to upgrade one of six weapons
* Take advantage of vertical space while engaging enemies through the air
* Revisit the single-player campaign on multiple difficulty levels 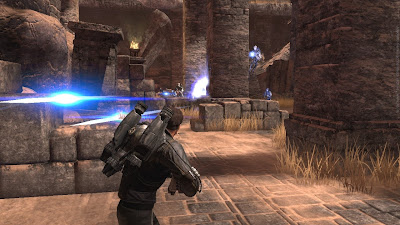