I just installed RA ( Red Alert ) 2 fine, but when I started the game, then it shows the picture of the Statue of Liberty, but then does not show the video If I ALT + TAB out, it shows only the picture of the part of the video, which there should be. But it´s like it is freezed.

In the menu there are no buttons, too.

I tried setting the compactibility mode to Windows XP SP 2, open as an administrator, patch it to 1.006. To lower the resolution does not work, too.

1) You need to set up another (fake) screen. Right click on desktop->screen resolution.
2) Click the Detect button. Unconnected screens will appear.
3) Extend desktop to a VGA connection on the Intel GPU (screen 2 in the image).
4) Drag the 2nd screen to the corner of the primary screen so the mouse boundaries of the primary screen will remain (almost) the same.
5) Click OK/Apply. A reboot is recommended. 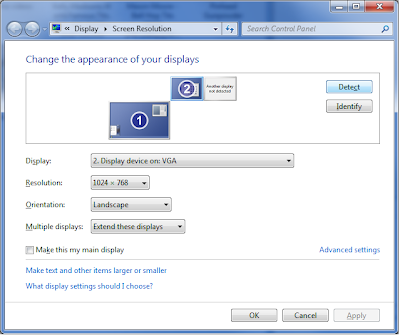