review: This one borrows a lot (onlyo) from Phantasy Star Online, but brings a lot of surprises from the older 4 games, (onlyo) like the planet hopping where the camera positions (allpcgame) itself behind the spaceship just like in PS4. The story mode is also good, albeit a bit corny though at times. (onlyo) Compared to PSO, it is much faster (allpcgame) paced and the system is just awesome. As usual though, it (allpcgame) seems like Final Fantasy is stealing the show from a clearly superior, underrated "ph"ranchise online only. 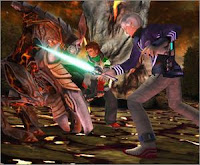