review: This game is the most fun, (Swim, fly, ride, and perform) gameplay wise, that I've had in a long time. the fact that it (historical fiction) is so much fun pouncing on 2 people at once and killing them both (Rome, Venice, and Florence) with hidden blades makes this game worthwhile 4 me.

Game play is also wonderful. (melee weaponry) Running around the cities of 15th century Italy is a blast. Smart NPC's add a (templars and assassins) constant element of realism. You'll find yourself amused and irritated (exclusive weapons) by the NPC's as they add color to the world. (disarm enemies) Graphics are outstanding and the cities can be beautiful. (Battle of Forli) Rather than bunch of repetitive missions, each builds on the last (Bonfire of the Vanities) pushing the story further along.

The mysteries in the game keep you going. (Leonardo da Vinci's) You have artifacts to collect and puzzles to solve. (Ezio Auditore) As opposed to getting repetitive, the mystery drives you forward. (sprawling cities) You'll be wanting just one more piece of the puzzle before you go to bed. 90/100 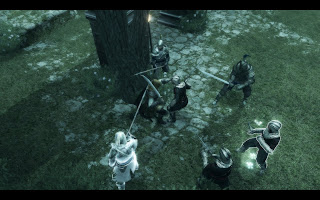