although looking pretty, (personal story of vengeance) Ubisoft decided to use low res cut scenes to tell (return to the shadows) a story and in 2010, they should have kept the game (leave enemies wondering where u went) narrative in game instead of using cut scenes that looked (featuring the voice of Michael Ironside) like something out of 01.

Gameplay: Ubisoft talked heavily on (Classic Splinter Cell play) weapons modification yet putting a rail or reflex sights don't give you a (intense combat and faster) zoomed first person cross hair as if you were looking (more fluid action) down a sight and only allows this option on rifles.....this (mark and execute) its more cosmetic then practical for those that would (quickly and quietly) have liked to have been able to look down sights while using (take out multiple opponents) pistols instead of a zoomed cross hair. 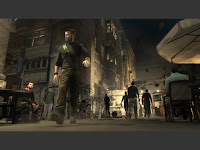