description: Starcraft 2 features the return of the (mastering new unit types and technology) three races from the original game: Protoss, Terran, and Zerg; Blizzard states these are the only playable races in the game. StarCraft 2 is also designed to (features an all-new 3D engine) focus more heavily on the online multiplayer aspect, when compared to the original StarCraft. (Play as or against the protoss) The changes include overall improvement in Battle.net, (more detailed environments and large-scale armies) a new competitive "ladder" system 4 ranked games and new matchmaking mechanics—designed to "match-up" players (Features a 29-mission single-player) of equal skill levels. In addition, the replay function, (campaign and challenge-based mini-games) which allows players to record and review past games, is being improved. (Full stat-tracking is available, along with voice communication) Blizzard has also stated they have made some changes to the game that were suggested by fans. 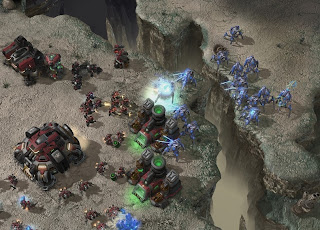