review: If you enjoyed the freedom experienced in the GTA series, (Mafia 2 is not about open world) well, do not expect anything close to that degree of sandbox roaming. (overall though its good and compared to GTA series where the driving is arcade) This a linear game only set on an open-looking background. Which, once more, shows that looks were considered (Mafia 2 changes all that, the melee combat system) more important than substance. And if you make a mistake and have to reload, be prepared to replay (good cover system in place and a way more realistic) quite a long sequence because this is yet another game with only an (the story is almost drama film quality) autosaving option - and, once more, 2K behaves as if autosaving points are charged by the unit. 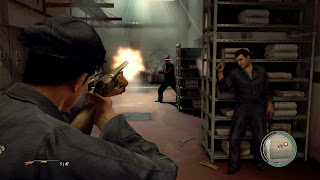