The first in a planned trilogy 0f games based on TSR's popular AD&D franchise, Birthright challenges you T0 unite the divided kingdoms of Anuire. It vvon't be an easy task, because an enemy called the Gorgon is systematically killing the kings of the land & consuming their bloodlines. 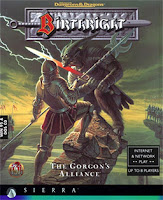 Playing the role 0f a young king, you must rule 0ver your kingdom, participate in negotiations, form alliances, lead your army to battle, and command expeditions to find spells, vveapons, & treasures to claim your birthright. 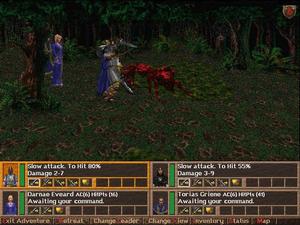 Players take on the role of ruler, or regent as they are called in Birthright, of a nation on the continent of Cerilia. The objective of the game is to gather power and influence while the other regents try the same.

In order to accomplish this objective, the player has many options at his disposal. These include warfare, diplomacy, magic, manipulation of holdings such as guilds and temples, the establishment of trade routes, et cetera. All of these actions take place in a turn based fashion on the world map, with the exception of the adventuring, which is done in real time 3D. 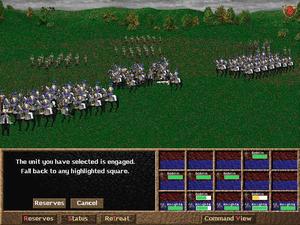 The adventure game engine was a Doom II engine clone: a 2D/3D engine which has essentially a flat layout map. The innovations at the time were the use of three resolutions of avatars which were hot swapped in depending on the distance from the viewer and the amount of memory on the hardware. Also there were flying wyverns and spiders which crawled on the ceilings as well as the floors. Due to the nature of the game engine it was not possible to get them to crawl on the walls. For the time period of this game's development the textures and avatars were significantly higher resolution than other games using similar graphics engines. However a slow CD drive coupled with a medium amount of memory could cause the game to pause as it swapped in and out higher resolution graphics. There were resolution settings that could be adjusted to tune those features.

The adventure game play suffered from difficult to control avatars and that the art was not made with contact points. That is to say no one piece of an avatar's art could be communicated to the game engine just what it was. For instance, to have good looking sword play, it is necessary for each avatar to know where the opposing avatar's sword and shield are. There were sounds of steel on steel, steel on leather and they were used for the strike foley but the art being center spaced looked clumsy as the swords either passed through each other, or missed entirely.

If the player failed to equip their spell caster with the necessary spells before adventuring those spells were unavailable to them and forced the player to leave and re equip.
[edit] Battle system

Gameplay
There was also a battle component to the game. When armies met on the world map the player could select to let the computer do dice rolls and determine the outcome based on the character attributes. Or the player could enter a battlefield. The battles were turn-based and fought on a grid that was copied from the paper game. The game engine used the same engine as the adventure game. This made for some difficulties as Doom II engines have difficult time rendering worlds which do not have intermediate walls. The battlefield being essentially one large room. The avatars were used to represent the unit's health. As the unit was wounded the avatars were "killed" off until it was destroyed or a dice roll forced them to flee the field. The defending army would get to pick the terrain type. There were fields, marshes, woods and a mountainous terrain. An elf army would get a bonus for fighting in woods, dwarves get a bonus for the mountains. There were some obstacles like water or trees through which the army could not advance or lost its charge bonus. In general though as with all D&D games ranged weapons win the day. Archers who run and shoot and wizards who cast and shoot could nearly always defeat the computer armies. This advantage is not translated to the dice rolling choice so players in general would elect to fight their own battles. A small graphical innovation was that the avatars had a random percentage of scaling applied so identical soldier art would not appear identical. Thus there were short, short fat, tall, tall fat and medium sized troops. Although their hit points and defense were based on their unit's strength the same way that the paper game battles were fought.

In order to win the game, a certain amount of gold (points) were necessary to be collected and to destroy the Gorgon. There were a number of successful ways to win this game which made for a high replayability.