Remake of the Sega Classics for PC

Available now on the PC - a new batch of SEGA Genesis Classics!

A top secret crime organization has taken over what used to be a happy, peaceful metropolis and now no one is safe. Rampant crime and violence are commonplace after the syndicate bought off government officials and the majority of the police force with lucrative bribes. Frustrated by the corruption on their force, a group of young officers quits with a plan to take back the city in their own way. With special hand-to-hand combat abilities, Adam Hunter, Axel Stone and Blaze Fielding step onto the Streets of Rage to risk it all to save their city, even if it means putting their lives on the line.

Gunstar Heroes Release: Jan 10, 2011 Original Release: 1993
The Gunstar 9 planet was peaceful for many years until the vicious dictator, Colonel Red, kidnapped the Gunstar twins' older brother and used mind control to make him his slave. You'll face many different enemies and bosses as you battle to stop the dictator from unleashing “Golden Silver the Destructor” with apocalyptic consequences! 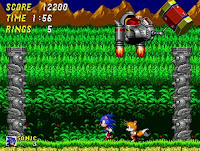 Sonic The Hedgehog 2 Release: Jan 10, 2011 Original Release: 1992
Dr. Eggman (AKA Dr. Robotnik) begins his zealous search for the Chaos Emeralds to fuel his new "Death Egg" contraption. One afternoon, he launches his full-scale attack on the island. Dr. Eggman imprisons all of the helpless animals of the island and turns them into mindless worker drones. Fortunately, Sonic will thwart Dr. Eggman's plans at all costs - and this time, he isn't alone, as Tails decides to aid him in the battle. Together they must locate the Chaos Emeralds before Dr. Eggman does, and put an end to this diabolical scheme.

Landstalker: The Treasures of King Nole
After hearing of the legendary treasure of King Nole, the elvish treasure-hunter Nigel undertakes a quest to gather various pieces of the famed loot. His journey takes him through villages, caves and dungeons that hold King Nole's riches, and along the way, he'll have to help the inhabitants of the island while fighting against the treachery of Duke Mercator, who is searching for the treasure as well. A variety of obstacles and foes will try to deter Nigel, who must use all his wits and skills to defeat Duke Mercator and uncover the secret of King Nole's treasure. 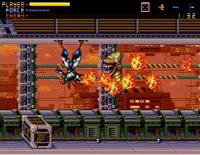 Alien Soldier
As Epsilon-Eagle, you are an alien soldier that has been genetically engineered to produce maximum intelligence and strength. You were once a member of the criminal organization Scarlet, but when you decide to break from the group, you are forced into a showdown with Scarlet's new leader Xi-Tiger, who kills a hostage in his attempt to destroy you. Now it's up to you to take revenge against the bad guys in this side-scrolling action game! Choose from six different weapons and battle the bosses of Scarlet until you reach the final confrontation with the ultimate secret weapon!


Light Crusader
Each day, more good townspeople of Green Row have been mysteriously, and beleaguered King Weeden summons the knight Sir David to investigate the disappearances. Armed with his wits and his sword, Sir David must find the cause of this strange evil and save the people of Green Row before things get any worse. Take the role of Sir David in this action-RPG and get to the bottom of the mysteries of Green Row as you fight enemies, solve puzzles, and use your best combination of brains and brawn to save the kingdom.

Shining Force
In ages long forgotten, Light fought Darkness for control of the world. Finally, the Ancients defeated the evil ruler of the dark forces known as Dark Dragon and cast him into another dimension, though he vowed to return in 1,000 years. As time passed, all memory of Dark Dragon was buried and the land of Rune enjoyed ten centuries of peace. Yet, as promised, the Dark ruler returned along with hordes of evil creatures that ravaged the land. As chaos erupted, several strongholds of Good still held out awaiting a Hero who could wield the Powers of Light!
Email ThisBlogThis!Share to TwitterShare to Facebook