GameInfo: Dead Island is an upcoming first person horror action-adventure video game developed by Techland for Microsoft Windows, PlayStation 3, and Xbox 360. It is centered on the challenge of survival on a zombie-infested open world island with a major emphasis on melee combat.

Dead Island will feature open world gameplay, played from a first person perspective, with up to four-player co-operative play in a heavily interactive environment. The focus will be on melee combat, incorporating customizable weaponry, vehicular customization/combat, and RPG elements. There is an experience system and a skill tree system. There is also a stamina bar, meaning that after a set amount of action with a weapon, the character will need to stop to regain their stamina before continuing to attack. It has also been confirmed that there are "special class" zombies, which are more powerful than the standard zombie.
Players will need to use flashlights in dark areas and during night time sections, adding suspense. Changing seasons have been confirmed to not take place during the game, although a weather system is in effect.Although there is a child being "infected" in the original "Dead Island" trailer, it has been stated that there will be no children zombies in the game. The developers feel that the lack of children adds an element of reality, showing that they "just didn't make it. 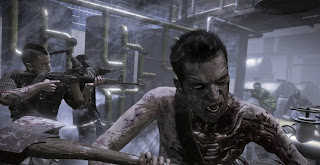