GameInfo: Skyrim is not a direct sequel to Oblivion, but a new chapter in the Elder Scrolls series, set 200 years after the events of Oblivion. In the preamble to Skyrim, the Empire began ceding territory to the Elven nations it once ruled, because there was no heir to the Emperor's throne. The Blades had no one to defend, and gradually died, were murdered, or secluded themselves from the rest of the world. After the king of Skyrim was assassinated, a civil war broke out amongst the native Nord race – the majority being those who wished for Skyrim to secede from the Empire, and the rest being those who wished for Skyrim to stay in the Empire.

As with previous Elder Scrolls games, Skyrim begins with the player character as an unknown prisoner, on the way to their own execution for involvement with the Stormcloaks, the group founded by the king's assassin.
According to leaked gameplay, as your character is about to be beheaded, a dragon comes, destroying the town where your execution is taking place. The player eventually learns that Skyrim's civil war is last in a sequence of prophetic events foretold by the Elder Scrolls, which also foretell of the return of Alduin, the Nordic god of destruction. Taking the form of a gigantic dragon, Alduin is prophesied to consume the world with his servants, the Jills (a race of black dragons). The player character is the last Doväkiin (Dragonborn), a dragon hunter anointed by the gods to help fend off the threat Alduin poses to Skyrim and Tamriel. Aiding the player is Esbern (voiced by Max von Sydow), one of the last Blades. 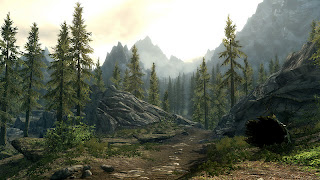 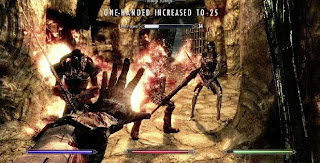 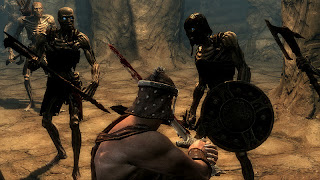 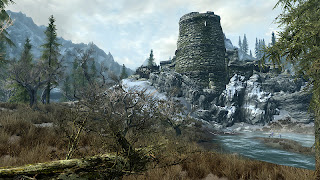 the BEST RPG games...love it!!