LEGO Lord of the Rings Review

Best of any Lego games I've ever played!

I've played some of the Lego games including Indiana Jones and Harry Potter. Even though those games were fun, I never got into the whole Lego series. But with this game, it blew me away. This one made me enjoy every minute of it!

The story of course follows the adventures of the Lord of the Rings trilogy, which I'm a big fan of the series. I also noticed that there were some parts of the books they added to the game (if you read the books, you may had noticed too.)

As for the cut scenes, I did enjoy them. I wasn't upset or anything about the game having the dialogue from the movies. In fact, I think if they didn't have the dialogue, this game would be a bit boring (like the HP Lego game having no dialogue; though it was good, it made me bored as I continued to play.)And every time I've played the Lego Lord of the Rings in front of my younger siblings, they always cracked up at the jokes in the cutscenes, especially when Boromir died. Even I enjoyed and laughed at those scenes, too.

I was already impressed by the beautiful of the whole landscape in the previews and reviews of the game. The makers really put their best into this game. I also like it how you can explore Middle Earth with your characters before continuing on with the story. You could unlock other characters, collect blocks, or go on quests from other NPC. Giving the player a chance to take a break and just explore was a good thing to have.

Being a Lego game, I did find some parts easy. They point out how much wood you need, how many enemies you need to defeat, etc. I actually find that good since there will be children that will be playing this game. However, even though I'm an adult, I've found myself either stuck or in constant groan when my character dies. Not that it's bad or anything, I find it more of a challenge, making me more excited as the fight presses on.

Overall, if your kid or even yourself are a fan of Lord of the Rings, this game is by far one of the best in the last few years.  Enjoy! 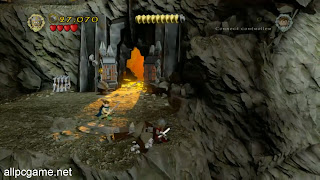