Ninja Theory, developer of the brilliant "Heavenly Sword" and "Enslaved: Odyssey to the West", has one of the worst positions in the industry right now. Despite Capcom giving them full graces to do what they want with the perpetually popular "Devil May Cry" franchise, they have an angry herd of gamers with a disdain for change refusing to play their breakthrough game because of several moronic, petty reasons. The biggest one of these is that Dante no longer has white hair, and that it's not Japanese enough, and... well, you get the point. These talented men and women have put years of effort into this project, and people aren't biting because of the protagonist's haircut. Ahh, don't you love gamers sometimes?

It's a shame, though, really. Those people aren't playing this game because of a silly little bowl cut, and consequently, are missing out on one of the best, most explosive and politically potent games in recent years. "DmC: Devil May Cry" is brilliant on virtually every possible level, and for those who don't give a donkey's rear end about hairstyles and just want a great game, it's simply a must-play.

Set in an alternate universe to the previous entries, "DmC" follows demon hunter Dante, a rambunctious young man who enjoys threesomes, pizza, and parading around in the nude. Imagine his surprise when he finds out that he's actually an angel-demon half-breed, and that a demon lord runs the world's biggest bank, and that half-breeds are the only ones who can stop such a powerful foe. Further exacerbating this problem is the fact that the city he lives in is, quite literally, trying to kill him, and routinely changes forms and coughs up demonic foes to put an end to his demon hunting days. Add in a long-lost brother, a graffiti-spraying witch, and enemies that consist of soda companies and corrupt news organizations, and you've got a zany plot full of twists and turns.

There are two elements that make the story such a winner, and the first one of these is simply Dante himself. It was admittedly risky tampering with such an established character, but lo and behold, the masters at Ninja Theory have pulled it off beautifully. Having even more style and panache than his predecessor, this reborn protagonist has a streak to him the old one simply did not: he's quite likable. While I thought the original Dante was just as pretty and flashy as the next guy, even diehard fans of the original games admit that he's a bit of a tool, and an unabashed dork. While I can understand growing attached to such a character, current gamers might not be as receptive to him. This isn't true with the new version, who is just the right amount of cocky and levelheaded to be instantly liked. Full of witty one-liners, unconventional approaches to troubling situations, yet with enough pathos to be easily sympathized with, the new Dante is a winner.

The second thing that makes the narrative so engrossing is how bold it is. Ninja Theory is known for unconventional storytelling choices (Nariko's fate in "Heavenly Sword", the live-action ending of "Enslaved"), but this time, they've gone out of their way to send a scathing message to Americans. They start by making the world's economy rigged to satiate the whims of demons, making the little guys suffer. But they placate society by spiking the world's most popular drink with a "secret formula" (sound familiar?), which is actually a psychotropic to keep them fat and dumb. These fat and dumb people get their news from a corrupt news organization, spearheaded by a man with a receding hairline who looks almost identical to Bill O'Reilly.

"DmC" is a vicious assault on American economics, news and consumer culture, and it's absolutely beautiful because of it. I would hazard to say this game may become unpopular because of how blatantly and gloriously offensive it is, and how many sponsors it probably alienated due to its outwardly political stance. Kudos to the writers for not backing down from their gutsy artistic vision.

Not to say this game skimps on content when it gets down to hacking and slashing. The developers have taken their experience from past games and mashed it together with the classic, combo-driven gameplay people have come to expect from the franchise. It's a beautiful mixture, much like virtually anything from Starbucks, and with new enemies constantly introduced, players are forced to keep on their toes and not mindlessly button-mash to win. This never feels unfair, however, due to the routine upgrades you'll be doing to Dante, who has loads of unlockable moves and combos for his varied and satisfying arsenal. Combat is fast, furious, and full of depth, so whether you like laying the smack-down on hordes of enemies, or tweaking characters to your play style (all upgrades can be undone and swapped at anytime), you'll find something to love here.

What should definitely be pointed out about this entry, in comparison to the older ones, is that the platforming is finally something worth calling home about. That's actually an understatement, because the simple act of jumping on stuff in "DmC" is something special, something fun, something fresh. Dante has a double-jump, a mid-air boost, a chain that pulls him into things, and a chain that pulls things into him. Keep in mind that the environments are always changing with every step, so when you're not staying alert during battles, you're on pins and needles trying to stay on solid ground. Heck, sometimes they even mix the two. On the gameplay front, much like the story front, "DmC" is positively flawless.

Now, it's obvious that this is something Capcom threw a lot of money behind, because this game is a feast for the eyes. The world of "DmC" is full of imagination, with pavement that rips out of the ground and spirals into the ground, buildings that warp and compress in attempts to kill Dante, and a strange alternate dimension suspended in the sky. The set pieces are all gorgeous, running the gamut of different settings, from a demented carnival to a soda factory from hell. Especially worth noting is how much effort went into crafting a set of unique and varied enemies, which has always been a defining trait of the series. I'd hazard to say this is the most original and best-looking bestiary in a "Devil May Cry" game so far, in fact. Art direction is more beautiful than anything we've ever seen in the franchise, and it's wonderful to see such imagination replacing the somewhat drab settings of previous entries.

It's even better that the art direction pops from the gorgeous graphics. This is one of the best uses of the Unreal engine on the market, period. Animation is fluid, and every inch of the world is beautiful to look at... well, as beautiful as a city that's alive and trying to knock off the protagonist can be, anyway. Wherever you look, Ninja Theory's city of Limbo is gorgeous, as are its inhabitants. Once again, the developer has achieved perfection in this area.

Making this the complete package is the killer soundtrack, done by Noisia and Combichrist. Taking a cue from "Max Payne 3", whose entire soundtrack was done by rock band Health, "DmC" has an entire score composed by these two talented groups, who come together and make a ode to gorgeous musical overkill. Noisia is an electronica trio, and Combichrist is a metal group, so you can pretty much guess the kind of music you'll get here. Loud, fast and pounding synthesizers pump hand-in-hand with wailing guitars and screaming male vocals for a good portion of the game, and surprisingly, this works.

The main reason this type of music doesn't annoy here is that it really fits the entire mood of the game, which is one of decadence and flash. Even the brief dives into dubstep territory are enjoyable, and both groups know when to keep the music low-key for more emotional and serious moments. This soundtrack is triumphant, and a perfect match for the atmosphere.

Finishing out the strong post-production elements is the voice acting, which is done by a relatively unknown cast who manage to pull it off perfectly. The biggest joy here is definitely Tim Phillipps as Dante, who brings a charming rogue streak to the character, balancing cocky, funny and angry at regular intervals. Here's hoping he stays on board for future entries. Another highlight is David de Lautour as the new and improved Vergil, who has a very "Occupy Wall Street" air about him. Other characters, such as graffiti-tagging witch Kat, and a truly ominous main villain make this the complete audio and visual experience.

That isn't to say that there aren't a few niggling flaws holding "DmC" back from complete, sublime perfection, however. The biggest one would have to be the contrived and bothersome bonus stages. Sure, you don't have to do them, but if you opt to, prepare for some cut-and-paste racing and combat sequences. And if you don't do them, your overall level score gets brought down, which is relatively annoying. Another small gripe is the amount of time it takes to load levels; it's not painful, but it takes longer than it feels like it should. But because the game is gorgeous, and has a lot going in each sprawling level, it's forgivable.

These are two tiny little chips in what is otherwise a glorious suit of armor, however. Perfectly balancing plot, gameplay, graphics and music, and mixing in excellent voice acting and brilliant social commentary, Ninja Theory's take on the "Devil May Cry" may very well be the best entry in the series since its inception. Devilishly brilliant and fun, "DmC: Devil May Cry" is already a prime candidate for Game of the Year.

But hey, maybe you shouldn't get it. After all, he doesn't have white hair... 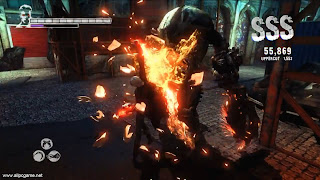 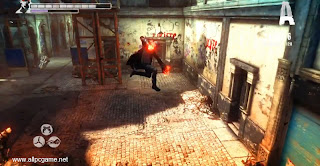 Totally agree, oh and the Classic Dante outfit, is unlocable on the PSN and Steam and also you unlock a White haired Dante by finishing the game a first time, enjoy.

i have played DmC 5

simply, they have ruined the game

- Dante's character is lame compared to Dmc3 and 4.

- Dante's and Virgil's voices can't be compared to Dmc3

- the game colors are confusing

- The music is acceptable

finally, the game is very short and not challenging at all