Hawken is basically a gundamn style mech combat game with a western junkyard brawler look that is fast and furious. If your expecting mechwarrior with slow combat with slow moving mechs then this game is not for you, it is much closer to chromehounds or Japanese style mech games. The shooting is skilled based it is not the low time to kill bull that is plaguing other FPS games where map knowledge and spotting the enemy first is all that is required.
The game has an emphases on landing skill based shots and out maneuvering opponents. Once you master dodging in and out of cover and landing skill shots you'll soon be able to rank in the top half of the scoreboard with just about any mech. The starting mech actually is one of the better mechs. It starts with the assault rifle which is the most well rounded primary gun in the game and the TOW which is hands down the best secondary weapon.

The only down side to fred starting mech is that it is an ugly mech and an eyesore but it has it's charm. Anyone who says the game is pay2win simply doesn't understand the game since you can acquire everything in the game with time. Meteor points just allow you to skip the grind and purchase paint jobs. Now for the bad stuff. Despite Hawken's shooting mechanics being solid the game lacks variety and customization so far. The tech tree has very little effect on how your mech plays and I think it is mostly a place holder right now. Paint jobs are very limited with no ability to change color palates or add much to make your mech unique from other players. The game modes are also horrible. Basically both objective game modes suck right now. Seige just leads to snowballing lopsided matches and missle command or what ever it is called is your run of the mill domination style game.

The game could use a capture the flag style mod or some kind of better objective game mode. With that said this is just about the only game that I will play death match or team death match in. Both those modes are great but without a more objective team work orientated game like what I was use to in NS2 I can see this game growing stale. There are only a few maps with prosk being a far superior map to the others with it's mix of open and close combat. Uptown is just a horribly designed map that favors close combat only giving very little freedom to sharpshooters and rockeeters. One aspect of the maps that is great is they are all multileveled much like the quake and unreal tournament maps of what I consider to be the golden years of PC FPS games. So in conclusion Hawken is the start of great shooter with a firm bedrock of mechanics that however is undermined by a lack of customization and variety. At this time the game still feels like it is very much a beta product but it also feels like it has plenty of potential. Since the game is still in development I have high hopes for it but I'm skeptical. 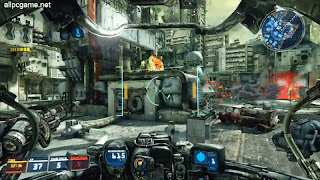