Aliens: Colonial Marines is cool in concept but very run of the mill in execution. While the game certainly lives up to capturing the look and feel of the movie with the enviroments, gun sounds and music, it still plays like an ordinary FPS.

Graphics: I'm not one to complain much about graphics since I consider them of only second or third rate importance compared to gameplay, but oh man! The graphics in this game are so dated they're almost embarassing to look at.
Textures will constantly pop in and out and even when they are all the way in they don't look very detailed. A while ago I was having fun with Doom 3: BFG edition; I'm not sure if it's because that game is still fresh in my memory but I can't help but think this game's graphics look very much the same....worse, actually. Very poor, laughable graphics all around.

Gameplay: Feels a little too much like CoD for my taste. The game comes with the now obligatory XP level up system for unlocking stuff in multi-player (which might be this games only saving grace). It really makes me feel less a part of the Aliens experience when a bar on the top tells me when I've ranked up. There's nothing innovative in the way the game controls, its mostly been ripped from other FPSers. Worst of all, I feel somewhat overpowered when fighting off Xenomorphs and human mercanaries. Yeah, I've died plenty of times but I'm suprised to see how high my kill count is at the end of a level, usually in the sixties. Xenomorphs will run mindlessly around every which way when you're fighting them and occasionally you'll even see a computer controlled fellow marine and an alien run into and clip right through each other. Your comrades aren't very smart either and will sometimes get hung up on a wall or run in the wrong direction. Your comrades also seem to be invincilbe. Not once did I ever worry about them or feel I needed to help, unless the game told me to. The only remotely cool thing is wrestling off a xenomorph when it grabs me and shooting it with my pistol...but even that feels a little silly. Aren't these thing supposed to be strong enough to bust through a steel door?

Level design is a least pretty good. The game has many branching corridors that you can sometimes get lost in. Kind of annoying but It would be even more annoying if the game constantly had arrows pointing your way and thus taking out all thought process. One level of particular note is one in which you're unarmed, helpless, and have to sneak your way through a level of blind, motion traking aliens withouth them noticing. This level had me genuinely scared, but I regret that some of the scare factor was taken away when I saw that these aliens kill you by suicide bombing. Obvious Left 4 Dead elements shamelessly ripped. This bit of survival horror is a nice touch but only a small bit of novelty in an unremarkable game.

Story: Not much story. You're a Marine sent along with several other Marines to investigate the remains of the Sulaco and later LV-426. Throughout, you'll have to fight off waves of xenomorphs and human mercanaries dispatched by the evil Wayland Yutoni Corp. who are, as ever, hell bent on capturing the xenomorphs to use as biological weapons. This is the plot of all the Alien movies thus far and its getting more than a little old.

In all, I'm sorry I went to a midnight opening and bought this game full price. The only thing I can do is try and get as much enjoyment out of it as I can but even then I'll probably still be sorry. 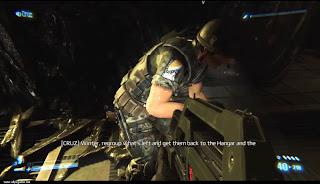 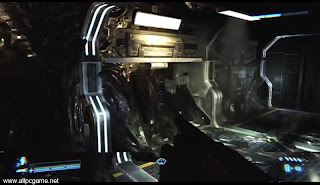