Oil Rush is essentially those Flash-based Real-Time Strategy games you played on the library computers in high school, combined with "Waterworld".

STORY: The story is that the world is covered in water, and various tribes are vying for control of the last remaining oil deposits. You're in charge of helping protect the oil deposits from capture by enemy raids. Makes for an interesting premise, but unfortunately it plays out like the plot on a SyFy TV Original (if you've never seen one, you can usually figure out the plot by the 30-second advertisement spot for the movie).

GAMEPLAY: Despite being a "strategy" game, there isn't much strategy involved. In each level you have to take control of a set amount of Oil Rigs (which give you Oil, the equivalent of money) and a set amount of Production Platforms (which make your units). First about Oil Rigs: They give you points that you use in order to build turrets around the Production Plants, and to use special abilities that you unlock in the course of the match (for instance, "instant repair" or "radar scan"... think of building abilities in Starcraft or General Abilities in C&C Generals). Production Platforms make units automatically to their maximum capacity (usually about 12-18). Units automatically defend whichever platform they're assigned to.

In order to attack, you select a platform (which selects the units surrounding it), and send them to the enemy platform. You don't get to select individual units, you don't get to select places on the map besides these Control Points. The only "micromanagement" the game offers is the ability to choose ALL of the units at a platform, HALF of those units, or 1/4 of those units, and then send them on their way. This is done with a button on the bottom right side of the screen, and honestly it's so counter-intuitive that in the beginning you'll probably be dividing your forces up left and right on accident. And as I said before, all units (including enemy units) follow set paths.
So really, there's very minimal strategy involved, and very little skill involved. You could I guess classify it as a graphical tic-tac-toe where your "X's" might switch to "O's" before you make the "O" an "X" again.

SOUND: The sound is one of the better parts of the game, it features a fun rock-based soundtrack. Considering the fact you don't have much to interact with in the game, the music does get a bit repetitive after a while, but at least in the beginning it sounds fairly fresh and fun. Explosions and gunfire sound pretty crisp.

GRAPHICS: The graphics are actually one of the better parts of this game. They're not state-of-the-art, but they are easy on the eyes, with lots of orange and blue hues. Unit design is wonderful, but the models themselves are a bit lower quality upon zooming in. Explosions look great. 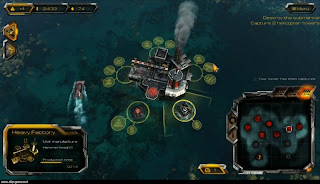 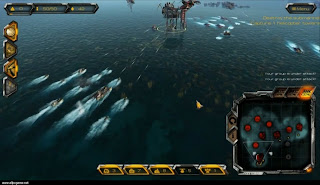