I was desperately hoping this game would be one of those under the radar titles that turns out to be way better than anything might suggest.

Instead we're presented with an ambitious idea, that falls way short of what it could been. It's a shame because there are plenty of things the game does right, that are lost in what it does wrong.

Let me start off by saying that this game is difficult. I opted to play the game through on hard difficulty. It is challenging to say the least. The real meat of the game is the campaign mode where the game is broken down into 3 different segments: Golden Era, Silver Era, and Modern Era. The Golden and Silver eras have 10 missions in each, and each mission has a different number of events that one must complete. The Modern Era has 15 missions instead of 10. It's a simple idea. However, where the problem comes in, is that the developers made it so you cannot skip around to different missions or different events in missions. You have to go through each one to unlock the next. In the Golden Era, you have the opening mission, no other mission is unlocked. You can only access the first event. Upon completing the main objective, the second event then unlocks. So you must play each event while successfully completing the main objective in order to unlock the next mission. It's tedious and unfortunate they chose to create the game in such a manner. About the only freedom one has, is that they can go into any era they would like. You do not have to start out with Golden, and then beat that in order to progress to Silver. While it might not sound particularly bad, the bulk of the tracks and cars in time trial mode are locked, and the only way to unlock them is by beating the Campaign mode. For anyone hoping to use classic cars such as the 1979 Ferrari F1 car right out of the gate, you will be disappointed. Not until you complete the mission and all the events in the Silver Era where the car is, will it be unlocked.

Now, if this game were easier, it's possible this could have been overlooked to a degree. The game has little flow in terms of difficulty. Some events are easy even on hard, others are brutal and enough to induce rage in the most calm gamers. The problem with the difficult arises mostly in the time trial events. After speaking to several others who have this game, we seem to have reached a general consensus that the time trial events are the absolute worst thing in this game. On hard difficulty, there were some time trials I did think were able to even be completed. You have to be capable of pulling qualifying pole position laps, lap after lap, much in the way Michael Schumacher did in his prime with the Ferrari F1 team. You also have to cut corners without having your lap time disallowed, as I cannot find any conceivable way of beating certain time trial times on hard without cutting corners. Some times are not too difficult, but if you are trying to reach the Legend rank, it appears that every main and bonus objective will need to be beaten. The bonus objectives tend to be where the more difficult times are. While beating the bonus objective times may not be of importance to those who do play the game, for anyone seeking to get the full 1000 gamer score will find it essential. On the other side of the coin, when events are actual races, these are incredibly easy for the most part. The only difficult aspect of races is avoiding the AI cars. Any contact with them whether your fault, or their fault, results in your car likely spinning off the track. It's easy to find yourself constantly restarting races because of contact early on that throws the pace off. Once you get past the AI cars, the race turns into a joke. They aren't capable of keeping up at all save for a few races where they appear to learn to race just for that event. That's not the norm. In one Modern era event on the Imola 1981 circuit, I found myself in a 10 lap race, lapping half the field before the final lap. The difficulty is probably the biggest drawback from this game, and is not for those who are just ok at racing games.

The controls are another issue. The handling can be downright awful. Certain cars can be incredibly twitchy. Too much back and forth to try to straighten a car out can cause a loss of grip with the track, and you'll find yourself smashing into walls/barriers/other cars. Most of this has to do with the car physics themselves. Some cars actually do feel like they have weight when you drive them. Other cars give a sense of weightlessness when driving them. If you learn to be smooth with turning the cars, it becomes easier to have better control over the cars. Do not expect Forza 4, or Gran Turismo 5 handling with a lot of the cars, more in the case of the older cars. From what I can tell though, the cars as they get newer do begin to handle much better. If you stick with the game, you'll likely develop a great feel for what you can, and cannot do with the cars. I found one of the tricks with the earlier cars is to get them to slide through turns as it makes it easier to handle them. The other trick is to learn to turn in on corners early because there are a lot of corners that can be taken much faster than you may think, but it is all dependent on turning in at the right time. The earlier versions of Monza are a great example. With some of the Golden era cars, I found if I turned into the Curva Grande at the right time, I was able to add 20+ KPH to the car speed through the corner. When you can find 20-30 more KPH on corners, it makes a huge difference in the time trial times you will set.

The graphics are a bit disappointing. They would have been acceptable around 2007, maybe 2008 at the latest. I have found pop-up to occur on certain tracks when you look into the distance. In 2012, there is no reason for pop-up in racing games. I lived with it in Gran Turismo 2 in 1999 on the PS1 when console hardware was not capable of what it is now. I expect a bit more from my games on the graphics front nowadays. The tracks themselves do not have the "pop" that you get from Forza 4. They are rather sterile in comparison. But this has more to do with the dated graphics than anything. The car models themselves are actually nice, still not up to Forza 4, or even Forza 3 levels, but it seems to be where the bulk of graphical development focus was spent. All Ferrari cars do have interior cockpit views, which is actually a nice touch. I enjoyed seeing it more for the F1 cars than anything.

If you like the sound of Ferrari engines, you'll enjoy the sound of the game. If you are expecting anything beyond engine sounds, such as an actual music soundtrack, you will be disappointed. There is no soundtrack for this game. The only "soundtrack" are the sounds of the engines. For me, I have absolutely no issue with this because Ferrari cars are known for their distinctive engine sounds. In other racing games that use real world cars, I turn the music off just to listen to the engine.

One of the things I do like about this game are the inclusion of certain tracks that to my knowledge have never been included in a regular console racing game. I know all of the tracks in the game do appear in the PC racing sim rFactor. For anyone who has played rFactor, the included tracks won't hold much value. For others, they may. The inclusion of the Imola circuit as it existed from 1981 till the deaths of Ayrton Senna and Roland Ratzenberger in 1994, is fantastic. I absolutely adored Imola in those days. I was never a fan of of the redesign that took out the Tamburello Corner, and reworked both the Variante Bassa and the Acqua Minerali chicanes. While I would have much more enjoyed the original 14KM Spa Francorchamps circuit, we get the 1980 version, which includes the Bus Stop chicane, as well as a lot of missing parking lot-sized runoff areas. Spa is always a fantastic track for everyone. The old Hockenheimring is here with the long straights through the forests. One of the more curious additions was of Rouen-Les-Essarts. It was the host for F1 back in the 1950s and 1960s, and it wasn't a track I would have expected to see in a modern racing video game simply because F1 last raced there in 1968. It's actually a fun track because of the elevation changes involved. Overall, while I do like some of the tracks included, there is not enough variety in this game. During the Campaign, racing the same few tracks over, and over again, in an Era grows very repetitive. The developers could, and should have added more tracks to this game. It's amazing that so many racing game developers make the mistake of not adding a lot of tracks to their games. The worst thing you can do is cause a game to feel repetitive due to a lack of track selection. There are more than enough cars in the game, but not enough tracks.

What is my final verdict on this game?

The truth about this game is it is geared mostly towards the tifosi (diehard Ferrari fans) who bleed Ferrari. It's not worth buying for more than $19.99, and even at that it may not be a good bargain if you are not able to handle the difficult level of this game. I actually have had some fun with the game, so that's why I rated it 2 stars. The other reason is because as a huge F1 fan, getting to drive the F1 cars such as the 312 F1-67, 312 T4, F1-87, and the F1-90 were actually a lot of fun. The F1 cars actually do handle much better than a lot of the cars in the game, and have a fantastic sense of speed. I was rather disappointed that for some inexplicable reason, they did not include the Ferrari F2004 in the game. The F2004 was the fastest F1 car Ferrari ever built, and absolutely dominated the 2004 season, yet they did not put it in the game. Beyond that, it's a niche game for a niche audience. If you aren't sure about the game, either rent it if possible, or wait till the price drops. If you still are not sure, ask yourself how hard you want to work at a video game. If you want to just put a game in and play it without too much frustration, avoid this game. If you absolutely need a challenge, then consider playing this game. As mentioned earlier, it's a good concept for a game, that unfortunately has just enough wrong with it that keeps it from being a good racing title. 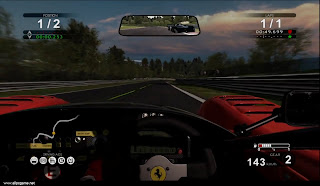 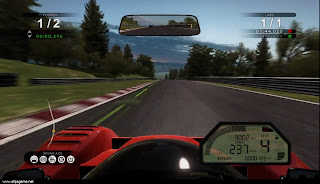