When Civ V was first released, I was deeply unimpressed. I hated (and still dislike and find pointless), the hex grid. I hated the non-stackable units. I hated the lack of religion and espionage. Really, there was almost nothing that I DID like about it, and it wasn't long before I wrote it off as totally broken and started playing Civ IV again.

Time passed, and the first expansion was released. That changed the game significantly, and suddenly made it actually playable. That trend towards being a good game continues with this expansion which, I am pleased to say, has finally "fixed" the game to the point where I no longer consider it broken and instead consider it to be very good. Good enough that I might finally leave Civ IV behind.

This expansion adds, as you'd expect, plenty of new Civs. You get the return of the Zulus, whose omission came as a Shaka to everyone (I'm sorry...I'm so, so sorry...). You also get completely new Civs, like Brazil, Poland, Inodnesia and Morocco. You even get Venice, which you play as only one city. That makes for an interesting experience.

The expansion also adds trade routes. Now you can build caravans and cargo ships, and actually engage in basic commerce with your neighbors. The mechanics are a little more choppy than I'd like, and I hate having to constantly select new routes, but it's still nice to have them.

You also get a few new religions, and Christianity has become nice and factionalized, though I'm confused as to why we only have one sect of Islam to pick from. There's also some new techs, like archaeology, and new units, like the archaeologist.

Probably the biggest change in the game mechanics is the World Council. It's a group similar to the UN that's automatically unlocked by the first Civ to make contact with every other Civ in the game. That first Civ also gets to control it, at least initially. The way it works is that you propose an idea, and then about 90 turns later (this interval decreases as game time goes on), everyone votes. You can even use diplomacy to persuade your neighbors to vote the way you want them to.

For example, while playing Brazil, I unlocked and controlled the council. I suggested a World's Fair. I then persuaded my ally, Austria, to vote in favor of the idea. They did, and eventually the idea was accepted. Everyone began developing their Civs for the fair. The civilization who completed it, me, then gets 100% extra culture for 20 turns. Not too shabby, and well worth it.

So diplomacy is a major aspect of the game now. You also get tourists, which help to spread your culture far and wide. Then there's the various ideologies that you can unlock. I haven't done that yet, so I can't comment on them, but I am looking very forward to it.

To sum up. This is a great expansion. If you like the base game even slightly, you owe it to yourself to try the expansion. It's very, very good. Now if you'll excuse me, I need to go invade Rome. 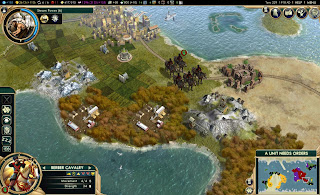