"Saints Row the Third" was a massive disappointment from its predecessor. While it still had fun gameplay, the rest of the game was limited, downgraded, disappointing, and too stupid and immature with its "Over The Top" 3rd grader mentality.

"Saints Row IV" is fun, with the addition of superpowers inside an alien computer simulation of Steelport, but it still feels just like "Saints Row 3.5" instead of a fleshed out sequel.

However, Saints Row IV stands out from three due to the new missions, objectives, altered activities and return of much beloved past Saints Row characters and features.

In all reality, the superpowers and maybe a few missions were probably part of the canceled DLC. And the "new" stuff they fleshed out into a separate game would be more of the story, like more missions and returning old favorites.

GAMEPLAY:
As stated, this game was originally planned to be a very detailed DLC, so it's not surprising that most everything in the game is setup exactly the same as Saints the Third. (Even most of the same glitches are still in, like the 'modding special vehicles in Rim Jobs' glitch.) The gameplay is familiar to Saints Row the Third, only with new powers and agility added in. Shooting is the same, and driving is ALMOST the same. While it seemed like mixing in superpowers with Saints Row gameplay would play oddly, it works well, here. And that's because the superpowers only compliment the shooting gameplay. Your only "real" powers will be superhuman speed and superhuman sprinting. The others, like elemental blasts and telekinesis, actually just work more like weapons. In fact, they simply replace grenades. Some people have compared this to "Crackdown," but it's really more like "Prototype" with better weapons. And while most of the new alien weapons are pretty dumb and impractical, they can be fun to some people.

However, what sucks is, many of the same problems from before persist. Like the lack of a cover system, for example. But at least, they added health recovery items back into the game, at the cost of longer delayed health regeneration, meaning you'll have to rely on killing enemies to heal yourself more than taking cover. Kill an enemy and they'll drop health, unlike in Saints The Third, where you just absorb damage until you can kill everyone, or simply die.

A few things are different, like getting rid of notoriety. Since there are no safe houses anymore, you'll now have to get rid of it by chasing down an A.I. bot and smashing it. This can be QUITE annoying and isn't nearly as convenient as simply hiding in your house, like before. Also, the new addition of super-sprinting, as well as the altered car controls (which now make shooting while driving on the 360 extremely difficult, to the point of non-usage) make street vehicles nearly obsolete. Aircraft still has its uses though, as stamina is not infinite (when you first start out), and you'll constantly need to get around Virtual Steelport. But now, summoning vehicles and using them through your phone/HUB works instantly. Call up a vehicle and you'll immediately warp in it, since you're inside a simulation, anyway.

The game is setup a lot like "Mass Effect 2" in which you first save/recruit your crew, and then, gain their "loyalty" and superpowers and upgrades that come with it. You even have a ship, similar to the Normandy and an A.I. who makes bad jokes (Kinzie is Garrus). There are also "romances" in the game too, but it's really just another Mass Effect parody/joke for you to easily sleep with your crew. It's nothing, really.

The missions themselves are setup even more linear than before, and because Steelport is just a simulation now, you'll feel like you have less of an open world experience. Especially since most superpowers will need to be upgraded in order to fully utilize them. Most of the fun Activities, like Professor Genki's "Super Ethical Reality Climax" and "Trail Blazing" are gone, and the new ones aren't that great, but some are. "Blazin" is a superpowered hybrid of Cyber Blazing and Racing. And many "Mayhem" missions return in altered states, like "Mech Mayhem" or "UFO Mayhem." "Fight Club" from Saints Row 2 returns, only with superpowers. Professor Genki's "Mind Over Murder", where you use telekinesis to hurl stuff through targets, is horrible, on top of feeling utterly pointless and is probably one of the worst activities in the game. And the only original Activity to return and also be in every single Saints game is good old fashioned "Insurance Fraud."

STORY:
While not nearly as good as One, or especially Two, at least this time, they attempt to have a decent story in Saints Row IV. It's an alien apocalypse as the Zin Empire, led by articulate and elegant Emperor Zinyak, invades Earth. The Boss (who is now the U.S. President) as well as humanity's best and brightest are abducted and everyone else is left at the mercy of the Zin. Now it's up to the Saints to break free and destroy the Zin empire from within. Old allies and enemies return as most of the game takes place inside virtual reality Steelport.

The lack of drama or suspense is noticeable here, though. While I get Saints Row IV is no "Mass Effect," certain things just don't seem right. For example, early on in the game, the Boss sees someone (actually, more than that) killed by the Zin after escaping the simulation for the first time. His/her response is to simply go back in the simulation and get revenge. No shock, no horror, no sorrow. Nothing, really. You'd think having just seen [___] completely killed by Zinyak, there would be more emotion than "put me back in the simulation so I can get payback on Zinyak."

If it wasn't for the nostalgic pull and return of so many beloved Stilwater characters from the series, I'd say the story is almost as bad as The Third. Not quite as much though, so this is definitely an improvement, even if it isn't spectacular, which most people won't expect from Volition, anyways. Expect lots of jokes and gag sights instead of compelling drama or storytelling.

SOUND/VOICE ACTING:
The voice acting is good. While most all of the returning characters don't have the same voice actors, some of your player protagonists, as well as your closest allies, do return and do a good job. Surprisingly, Volition even had them re-record all your Boss' catchphrases and sayings for the new game, instead of just reusing them. They say their usual quips and one-liners, but they're clearly not reused sound clips and are actually re-recorded. Along with all of this though, Keith David is here, as well, playing himself as well as Julius Little (original leader and founder of the Third Street Saints) and him alone is enough to instantly boost any game's dialogue.

MUSIC:
The music choices are HORRIBLE! Simply put. It's hard to say if they're worse than The Third, but the only radio stations you'll likely listen to are "The Mix" or "Klassic", which also includes Zinyak educating us mindless fools of this generation with some classic Shakespeare. Everything else outside of those two stations have nothing, whatsoever. Not to mention the game being heavily influenced by Dubstep this time around. So much so, it has its own weapon, appropriately named the Dubstep Gun. It's a music genre you'll either love, barely tolerate (like me), or absolutely loathe, so be aware that most of the game's non-radio soundtrack is the wub wub techno noises known as dubstep.

This is another game where you'll likely listen to your own music or nothing at all than the songs on the game. K-Rhyme and Gen-X has the most unlistenable music, and Heavy Metal and Reggaeton (Urban Latin) don't even return. (I personally don't even listen to either of those, but I know many people are bummed they don't come back.) Reggae music returns, but it seems to not fit in with the sci-fi tone of this game. If it wasn't for the radio station "The Mix" (which gives us Haddaway's "What is Love?", Outkast's "Bombs Over Baghdad", and Montel Jordan's "This is How We Do It"), this category would score be a Zero. But it is pretty awesome listening to "What is Love?" while escaping a Zin Mothership. And also, surprisingly appropriate.

It's almost exactly the same as Saints Row the Third. Maybe SLIGHTLY better. However, the permanent night sucks. Steelport was already pretty ugly at night. This game will be even more of an eyesore. Even after turning up the Brightness and Gamma settings to maximum. But, for what it's worth, the digital effects of the "simulation" are nice and work well, especially with entering the simulation and it 'loading in' once you come through the gateway. They can sometimes be a bit of a problem, for example, when modding a car and not being able to see cause it's constantly glitching, but these are minor issues. At the very least, they remind you that none of this is real, even inside the game itself. So harming pedestrians will bother your conscience even less now.

OVERALL:
"Saints Row IV," much like The Third, is a lot of hype and it doesn't quite live up to expectations. But don't get me wrong; it can be a fun game, and it definitely is better than Saints the Third, even if it still doesn't quite give us that amazing feeling anyone who loved "Saints Row 2" had when playing it for the first time. Most of the game is recycled from The Third, so it'll never really feel like you're playing an actual sequel, but the superpowers does give you a whole new experience and way of playing. Even with the superpowers though, the structure of the game and the way missions are set up make it feel less like an open world game and things feel very structured and limited.

Also, I have to mention, the ability to replay missions do NOT return! Just like the prior game. So that's a major disadvantage. "Saints Row IV," while not nearly on the level of the Stilwater games, is still worth playing. I just wouldn't buy it for full price. I'd say it's a $30-$35 game, not a full $60 game. It's fun, but if you've played Saints Row the Third before, the superpowers are the only real draw, here. And if you've played Saints Row 1 and 2 before, it's the superpowers and the nostalgic characters returning. 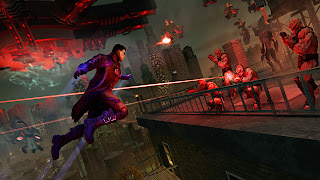 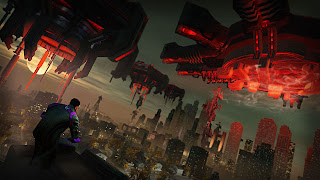 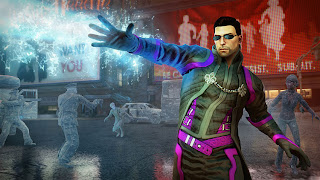