This recent iteration of the ArmA series has completely revamped warfare. Major graphical improvements, animation improvements, sound improvements and meticulous detail make the third ArmA a beautiful engine, the only in its class, to deserve the title of "military simulator." The series has made vast improvements to game play, allowing much more fluid combat, allowing the players to experience the situation without being impeded by bugs and issues that plagued prior titles.

This is not your standard arcade shooter, this is a military simulator and as such will not be enjoyed on the same level if you were to pursue a casual game, though that is still a possibility. This game really shines when you play with friends, in a cooperative squad. The large support for content creators is also a nice feature, although content creation is not unique to this iteration, with the implementation of Steam Workshop the installation of this content to any individual player of your squad becomes a painless experience. You will never be limited to playing the same scenario repeatedly because at any moment one of your friends could create, or discover, a mission on Workshop that your squad will wholeheartedly enjoy. In the prior iterations there was an enormous amount of content, however, due to the shear amount of content the quality of each individual item lacked. As it stands at the time of this writing, there is a limited amount of content, though each item is detailed, tested, and balanced to assure a quality that is unparalleled. One of the amazing things about this game is truly the ability to create anything you want within the game.

As any good game will undoubtedly have, there is a down side. As stated before, there is a limited amount of content, while this content is very high quality and very detailed, the low number is a bit disappointing compared to prior iterations. This game is also very demanding of even modern systems, the developers even stating that the "Ultra" setting found in the game was not designed with modern systems in mind, but for future hardware. With the release Bohemia also stated that the campaign will be released in free episodic packs every month, while not convenient, is not necessarily a bad thing.

The developers have already expressed their concern with the lacking amount of items to use in game and have stated that just as they have done with previous titles, they will continue to release new vehicles, weapons, etc. In addition, the developers have made great strides in optimization of the game in the past and will hopefully continue to do so, but optimization can only go so far as the issue is deeply rooted in the series' engine.

All in all, I find this game a large source of entertainment that can only continue to get better as Bohemia and the modding community continues to improve the collection and quality of what is available to us, the players. I would highly recommend anyone to at least give this game an attempt, while ArmA is not for everyone, and never has been, it can offer an unparalleled amount of realism, strategy, and cooperation compared to the "industry standard" type of shooters we find today. 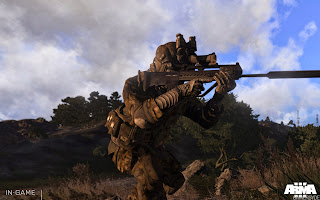