Outlast is a well designed game with a few key misses...

I felt the game and story arc both developed in the same pattern; strong introduction, sagging middle, and a strong end. Unfortunately, most of the game is considered to be the "middle", so for about 5 hours I felt as if I were simply jumping through hoops to finish.

This game suffers from the same thing as the original "Assassin's Creed"; repetition. You are constantly trying to find switches, levers, or keys while being hunted by a particular enemy (a lot of times, one that has chased you before...). I have to admit, the game was able to maintain it's level of scariness for the first encounter... maybe a bit during the second, but after that, the player starts to realize the patterns, understands the AI, and loses all immersion, at least I did. At this point, I found myself giving up on creeping past enemies and slowly walking around corners because I knew I would survive at least one or two hits from the enemy, and all I would have to do to escape is either climb into an air duct or close myself in a room and hide. Nine times out of ten, the enemy would break the door down, walk into my 10x10 room with one bed (which I would be hiding under), and give up his pursuit. Really?! You're not going to check the one and only possible hiding spot??? Oh well...

I don't play many survival horror games. Actually, to be 100% honest, this is my first one! I figured I would give the genre the benefit of the doubt and gave the game a 60/100. Perhaps it is a masterpiece in its own right? To me though, a non-memorable and simple foray through the dark.

To sum up:
Pros:
1) Beautifully designed
2) Strong introduction and ending

Cons:
1) Majority of game is repetitious
2) A.I is predictable and easily fooled (crouching is OP)
3) Extremely forgiving gameplay that removes all drama and tension from encounters. 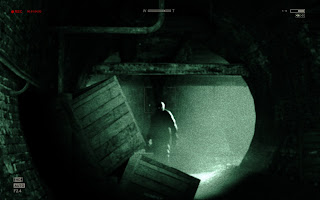