Batman Arkham Origins is a good (not excellent) addition to the series. I played the whole campaign in about 14 hours, including looking around for items (not all items in this time frame). If there was any concern with the game going to a new developer, there's really no need to worry about that. The gameplay and setting are almost exactly like Ark. City. There are a few new villains to battle, and new aspects of challenges, etc. The map is larger than the previous games. So there's a cool new fast travel aspect, but it's not easy to unlock every area unless you have the Brady game guide.

Cons: It would have been great to have a new main villain as an arch nemesis, but the Joker is back again. There are others in the game, but the Joker is still the main man. He definitely has worn out his welcome in my view. I know they had to have him to lead to the first game, but he could have just showed up in the end.

Although the game is called "Origins", there's very little real back-story revealed about anyone that we don't already know. It would have been great to see the decision point for Bruce Wayne to become Batman, but that doesn't happen. Yes, all of the characters are younger & there are a few cool bits. But there's not enough to make this a real prequel.

I also found it more difficult to grapple around the map. The grapple connections are not automatically the highest points as they were in AC. It's not awful, but another weakness anyway.
The setting is winter again- it would have been nice to have a sweltering summer or something different.

In the end, I'd say the game is worth playing if you've liked the others. There are definitely enough new things to hold my interest. I tended to rush through the first time, so maybe taking more time will be more rewarding. I also haven't searched for every collectible yet, and I have not tried the multiplayer.

I'm finding that by the third version, most games are found wanting or feel repetitive. I guess the good thing is that this game sticks to what it is instead of jumping the shark like AC3/4, etc. 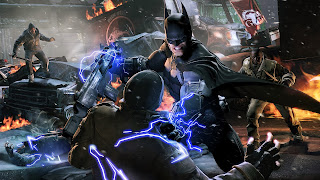