I was looking forward to this, as with many HD remakes (having played the originals the first time around) and so bought it straight away. But there my excitement ended. Visually it looks great, but this does not a good game make. The voice acting is awful, this does not really put me off. Less than 5 mins into the game (including cut scenes and loading) Conrad gets stuck in a wall. Restart. Less than 20 mins after that Conrad falls through the floor. Restart.
The AI is bloody terrible. You are more often than not dropped into a situation where you are jumped by mobs, and die, without getting a chance to either run away or to avoid their attacks, as mentioned by others the controls are very clunky and unresponsive, I was stood next to a healing station stabbing to use it, but to no avail. I died. The checkpoints seem random to be honest, and the only way that I have found to get through the majority of the game is explore a screen, run back to a known VR station, as that is the only time that you can get a reliable save. To be honest, if you never played the original, that is included and plays pretty much as I remember. But I would say, until this game is fixed, if you want to experience Flashback, buy a Megadrive and a second hand copy. It will probably still be cheaper. 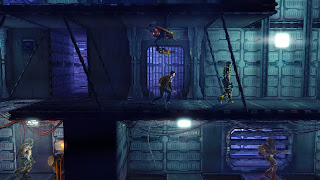