The Stanley Parable is an adventure game, and the premise is that you play as Stanley, a man who is content at his job where he pushes the buttons he's told to all day, every day. When Stanley discovers that his office is mysteriously empty, he decides to investigate. He comes to a room with two doors, and according to the narrator, Stanley chooses the door on his left, but you're controlling Stanley, not the narrator.

There are many, many choices in this game, and they all have interesting consequences. I'm not going to spoil any choices (beyond the first), because the magic of The Stanley Parable is figuring it out yourself. It also helps that the humor in this game is great.

This game's demo is free, and you should play it. Seriously. Even if you plan to get this game, play the demo first, because the content is entirely different from the main game, and there's at least one joke from the demo that is referenced in the game. If you want more, check out the original Stanley Parable, which is also free. This game is a remake of that game with much more content.

This isn't much of a "game", but as a piece of interactive storytelling, it's wonderful. If you're curious, try the demo, and if you liked that, you'll love the main game. For me, it was definitely worth $15 and I would definitely recommend it. 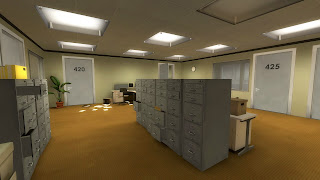