Burnout fan and newbie to the Need For Speed games. I have only played Most Wanted 2012 and Hot Pursuit. Hot Pursuit did not give you any reason to explore the open word and there was nothing rewarding to do so. MW 2012 was appealing to me as it brought the NFS cars and the open-world almost arcade type feel.

It would have been great to see more off-road play. GTA appeals to me more in that regard; this game's tight career progression makes it a must to advance your career mod your cars to survive the day-to-day rather then take off to the mountains. There are areas in the game but the detail is limited to roads and their shortcuts and areas that would be "road accessible".

ONLINE
PRO:
I have yet to unlock a lot online and offline, your career progresses online without needing to join manually. Started it up after the preload yesterday online was smooth yet you see a lot of people with slow connections playing the game. EA does ask you for your city so you can find friends.

CON:
I was chasing some players down as part of a chase and noticed that despite cornering the players and beating up their cars. They were able to repair it and speed away (without a repair shop!) some of the hits on players don't register.

When playing online it would be nice to have a marker of the players username on the car so we can collaborate on missions, jumps and explore. There is a GPS and Map but this can make it more of an online game like many others out there.

Graphics
PRO:
The graphics on the game are great. I get better performance with my GTX 650 with this game than NFS MW2, the card is being to the max in terms of temperature and RAM compared to other games I play. Weather is simulated and its cool to be driving down a wide highway with a storm brewing.

CON:
We need to see fixes for the pop-in and weird effects. Did not notice any graphics issues hamper game play. But the game seems a little faster while not online. 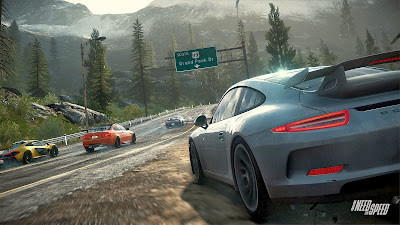 Recommended
Additionally, Need for Speed Rivals will support SLI-mode if your system is SLI-enabled.