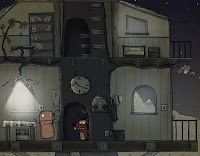 Gomo is a hand-drawn exploration-game, featuring its very own art style. Players take control of Gomo, who's out to rescue his dog Dingo from an alien abduction.
A great adventure awaits Gomo and the player, as they point, click and puzzle their way through the comic-style world. There are many obstacles to face and overcome with creative solutions, like, for example, a self-made balloon. Gomo's world is also full of secrets, waiting to be discovered. The game is about nonviolent gameplay and problem solving, focusing on puzzles and exploration in a visually unique world.

Gomo Debut Trailer
Fishcow Studio has released the official debut trailer for Gomo, their adorable point & click adventure in which players must rescue the main character’s dog Dingo from the clutches of the aliens.