Three years of modern dance, seven years of tap - and four hours of killing evil robots? It could only be one game. 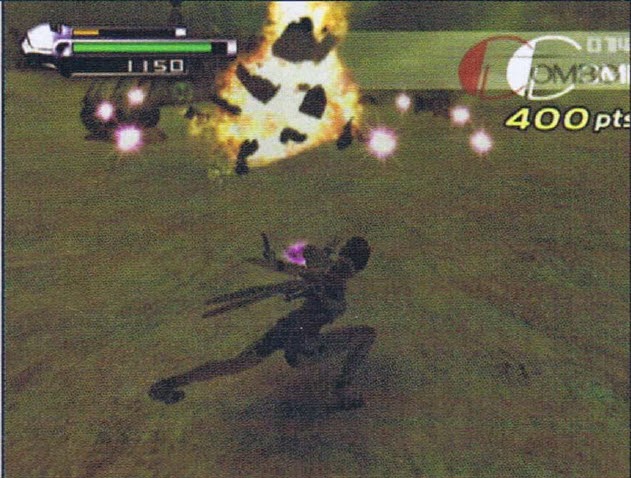 GET INTO THE GAME
Strike a pose there's nothing to it...
EVERYBODY DANCE NOW
Don't get struck with bravado on the difficulty select. Easy mode is reasonably tough, Normal mode is brutal and Hard mode is pratically impossible. Once you7ve completed the game on one setting, you can always use your finished save data to keep your existing costumes and weapons, as you ramp things up a notch.

TRIAL BY FIRE
After the first level, you can jump into Trial mode. It's not as risky as the main game, so is the ideal place to hone moves and earn points. Aim to buy the Prima Blazer by the start of level two.

Confused? Well there is every reason to be. The title stands for Product Number 3, but that's all the game gives you by way of explanation. Capcom's latest foray into the stylish-action genre dosen't bother with cut-scenes, or long-winded explanations of what's going on - it throws you in at the deep end.
There's no explanation of why you're on a planet full of hostile robots, all you know is that you're working at the behest of a mysterious, faceless 'client.' And there's certainly no given reason as to why Vanessa Z. Schneider, the game's heroine, constantly taps her foot and has to do arabesques to pull of special moves.

We've got no idea what Product Numbers one and two were, but is P.N.03 is anything to go by, they almost certainly involved line-dancing cyborgs.

The main reason for all this confusion, through, is that the control system feels so incredibly awkward - at least to start with. Vanessa can't move and shoot at the same time, so for most of the first level you'll stutter along not doing either properly. The secret is to hammer the shoot button like mad then leap out of the way of incoming fire at the last possible second. Initially it's awkward, and you're also hampered by Vanessa's reluctance to do the double-sidestep with any kind of reliability, until you buy some power-ups. Eventually, though, it runts ofut to be a clever system. Rather than dashing about shooting at everything, you've got to pick your shots and perfect your timing.

Rapid fire is advisable, because after killing an alien you've got a few seconds to finish of another one for combo points. If you want to up the stakes even higher, there's the temptation of a chunky bonus for any room you clear without taking damage - so it's a constant struggle to balance risk against mega-chain-kill reward.

Unlike other Capcom games you don't get points for offing enemies with style, but watching Vanessa dance past lasers should be enough of a reward for anyone.
Besides, all these points go on upgrades, contiunes and new spandex pants, so unless you start pulling of some ten-string combos in the early stages, you're going to have a tough time later on.

Suits come in three basic carienties, with three strengths to each. But the one that you pick isn't going to influence your gameplay that much, even if you've got the defensive Guardian suit, you still aren't going to be deliberately getting yourself shot.

Your best bet is to pick one you like and stick with it, ramping up its attributes with your spare cash. If you pick the Blazer - supposed to be the costume of choice for offensive players - you're risking serious thumb-callousing, because it doesn't even have an automatic fire upgrade. The main differences between the suits are the Energy Drives you can unleash with them, as Vanessa has only got a limited amount of dancing-juice that se can use to unleash disco death on her foes.

GOT THE MOVES
With the exception of moves like the Griffin, which causes a little light show and never lis anything, the Drives are all petty similar. And each makes Vanessa briefly invincible, and able to waste nearly everything on screen.

There isn't much reason to make the moves situation specific. More advanced attack cause more damage, but they also drain more energy, so there's little poin in using them
Instead, a good tactic is to choose a nice, quick homing-missile attack (handy for combos, see?) and sticking to it - possibly treating yourself to a huge laser blast for the bosses.

The enemies are a bit of a mixed bag. They aren't exacly menacing, and they aren't even that interesting to gawp at. They look like something you might come up with if you had too much spare time and a large bucket of Lego Technic to hand.

What's more, there aren't that many varieties of enemies - about a dozen by our count, and that's including big gun emplacements and tiny drone bots. But, what they are good at is keeping you on your toes. Most have two attacks, a basic laser blast and a meatier attact that they'll charge up if you give them half a chance.

Every attack demands a different approach. So, while simply stepping backwards will keep you safe from flying laser grid-bots somersaulting forwards is the only way to avoid the kank-droids' homing missiles.

On the tougher difficulty levels quite a few of the slower secondary attacks kill in a single hit, which forces you to use the sparse scenery as cover. And, because Vanessa can't just leap around haphazardly, you'll become an expert at recognising the tell-tale whine of a special attack charging up, then pirouetting away from danger as late as possible.

In the thick of combat, the only way to dodge the barrage is to learn how to flick out Energy Drives in a split second.

As regards the bosses, they embrace the retro-shooter tradition of having several weakspots and three or four attack patterns. They're impressive to look at, but not massively challenging to beat. Either you learn to blast out an energy drive when they're vulnerable, or they kill you. Either way it's usually over pretty quickly. Facton in that you have to fight most of them twice (there are only six bosses spread over 11 levels), and you're going to feel a little bit short-changed.

Furthermore, the rooms that make up the complex look eerily similar - probably doe to the fact that only a small team worked on the game. In some sections, you'll actually come across rooms that are exactly the same as each other, which just seems plain lazy.

There's a brief attempt to spice things up with some laser trip-wire sections that work amazingly well, but they're so easy compared to the rest of the game that you can't help but wish they were longer.

However, the levels mesh together surprisingly well in Trial mode. This is the bonus level-shuffler that you'll have to spend some serious time in if you want to make any progress in the ligher levels. In theory, this section is a bit of a cheat, since you can just thump through it as many times as you need, and pump up your suit's capabilities. In practice, however, it's absolutely vital since the game quickly gets super-tough even on Normal difficulty. The real joy comes from playing it through again and again, trying to maximise those combos and slipping enemy fire ever more pecariously.

Revaws like the Blackbird suit - powerful enough to disintegrate most bots with one nonchalant blast, but also vulnerable to a single shot from the opposition - emphasise the retro-hardcore appeal of long term play.

Confused? Don't be. It might not have the lavish graphics of the Resiseries, and it definitely hasn't got the atmosphere, but it has got bags of the sort of style you'd excpect of a Shinji Mikami game. Once you get used to the fiddly controls and bleak graphics, it's actually more of a pure test of skill than any shooter, except Ikaruga.

At four lours long it's a perfect weekend rental. But for a longer commitment, you'll have to really like shooting at robots. Dare we say thet the final plot twist isn't even going to impress you first time round, though.