Teutonic thinker Nietzsche said life is a choice between boredom and suffering, he didn't warn us that sometimes we have to endure both at the same time. Because Odama, this fusion of pinball and military strategy, this confusion of flippers and feudal soldiering, is a game you have to approach philosophically.

We wanted to love it, we really did. The whole idea is just so outlandish, so painfully weird that it just had to be enjoyable? Didn't it? Otherwise why did Yoot 'Seaman' Saito even attempt to create a voice-controlled real-time pinball/war game unless it was going to be truly brilliant? Why? But if understanding the man maverick's motivation is nearly impossible, explaining the rules of the game is only marginally easier. For each
one of the all too similar levels is played out a single screen table/battlefield where your objective is to get four nappy wearing skivvies to drag a bell from the bottom to the top. And to clear them a path through the massed ranks of rival warlords, you command an army who follow a set of simple vocal commands with diligence and fanaticism, but very little intelligence. And into this delicate balance smashes the Odama, the super-spherical weapon capable of crushing castles, damming rivers and flatten friend and foe alike beneath its indestructible bulk. Oh and it is your jump to simultaneously keep the ball rolling, the troops rallying and morale in the ranks rising.

But trying to splice Kessen and Kiss Pinball together hasn't resulted in the rise of an uber-game, more the birth of a tragedy. For Odama is simply a mess from the high concept right down to the screen blocking squawking of each lowly soldiers. And while your army of the brain-dead mostly recognise your orders, and notions of tactical planning are continually rolled over by the blind stupidity of the Odama itself. For even this primitive pinball itself rarely works as advertised often popping off screen, defying physics' laws at a whim, wiping out your own army with one false flipper-stroke or ending your game.

Combined with a difficulty level so cruel that Social Services should be told is the way that winning or losing can seem as random as tossing a coin. Although at least if a ten pence landed heads up you'd know why you've won as with Odama's shallow lack of strategy and variety, you'll always feel that fortune played a greater role than your planning or pinball wizardry.

Now add a save system that wipes your progress if you go back to retry  a previous stage, a sneering voice-over that mocks your failures, cheap and tedious cutscenes, repetitive level design and somewhat clumsy controls and just see if your ambivalence turns to anger:

ANY NOTIONS OF TACTICAL PLANNING ARE ROLLED OVER BY BLIND STUPIDITY

But that is Odama, it combines things that should probably never be put together: pinball and military strategy; ill-conceived ideas and poor execution; and yes, Mr 'Oddball' Saito and three year's worth of development time. 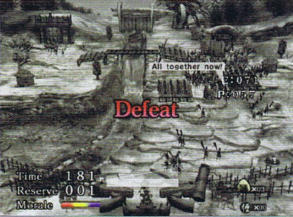 FOR WHOM THE BELL TOILS...
Command them or crush them. Accidentally of course. 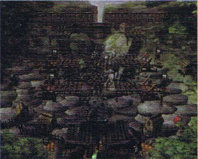 Each battle begins with the launch of the Odama. And while it's hugely destructive, it's a slightly imprecise weapon because it can only be guided by using the flippers or tilting the table. 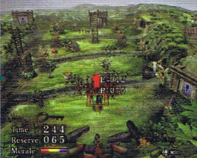 As well as running over troops, the Odama can be used to open doors, smash encampments and block rivers. While this can help your men, it can also destroy them by reopening flood gates. 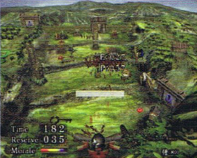 But while the Odama is a mixed blessing, ignoring it can be fatal. Not only do your outnumbered men rely on it to even up numbers, if the iron ball falls between your flippers then then game is usually over. 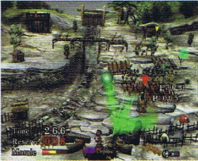 Collect powerups and the ball will be turned into a holy roller able to crush your foes and convert their souls into your reserves. Which is handy when the enemy ranks seem to be unlimited.

The enemy don't have an Odama so why do they have flippers?

Rally your chaps on an object and they will seize it. Eventually. 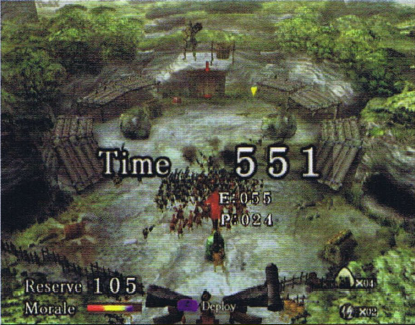 You carry your forces from one battle to the next. 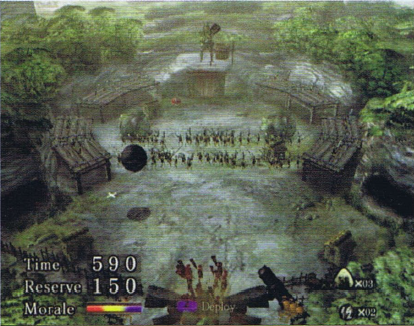 Knock the general from his plinth and he will march around.

+ The enemy generals are fun. / Utterly original / The mic is included.

-  Painfully hard / Confusing and messy. / Everything else.

5 VISUALS
Somewhat dull and static, it also suffers from slowdown.

7 MASTERY
Not exactly a technical marvel but the mic works.

5 LIFESPAN
Cruel difficulty will turn off the casual and depress the hardcore.

VERDICT: Cross-breeding between a pinball table and strategy game hasn't lead to a thoroughbred. This one is pure ass. 48/100
Email ThisBlogThis!Share to TwitterShare to Facebook